Wing foiling is a new water sport that is drawing in countless windsurfers, kiters, and foilers looking for something different. There are plenty of videos on social media of people doing incredible maneuvers on wings, but there are very few videos that go over the fundamentals. With this short video series, we hope to explain the integral parts of winging. By the end of this series, all of our viewers will know what it takes to learn how to wing foil.

Getting Familiar With Your Wing

What is the best way to get familiar with your wing? Start on land! If you wanted to get into kiteboarding you would start out with a trainer kite rather than a 12m, the same logic applies here. Going out with your wing on a lawn, beach, field, etc on a moderately windy day is the best way to figure out how the wing works. You can focus solely on how the wing reacts in the wind without having to balance on a board in the water. These are your first few steps towards becoming an avid wing foiler.

Parts of the Wing

The first thing you want to do is pump up your wing and make sure it holds air. Then you want to get familiar with the leash systems and handles on the wing.

On the very point of the leading edge there is a leash port where you can connect your waist/harness leash to the wing, double-check this connection as the leash prevents the wing from blowing away when you let go of it.

Connect your harness line on the harness line ports that lie towards the middle of the center strut. We do not recommend using the harness line for beginners until they have had success getting up and riding on foil. Using a harness early in your wing-foiling career increases the risk of tearing the wing. This is because it is hard to get away from the wing with a 2ft harness line compared to a 5ft leash. For the purposes of these drills we would not recommend the use of a harness.

The Y-straps on the wing are great for powered riding, as you can put more torque on the wing and keep the wingtips out of the water. Not all wings have Y-straps.

Find an open area like a beach, soccer field, or even a large backyard to practice flying the wing.

This is the easiest drill to practice yet can be the most frustrating when you hit the water. Practicing this skill on land will save you from struggling to carry your wing at the beach. Start by carrying your wing by holding the leading edge handle or by the leash just a few inches from the leading edge. With the center strut facing the ground the wing will float behind you. Try to avoid carrying the wing with the center strut facing the sky as the wing will fly in a variable manner. While walking upwind it is easiest to hold the wing over your shoulder and let it fly behind you. In a crosswind situation hold the wing downwind of you so it floats next to you. When you eventually have to carry your wing and board, it is best to keep the wing downwind and the foil upwind of you.

Practice sheeting the wing in and finding the power zone. One big thing we see in beginner riders is improper sheeting of the wing. Most people tend to pull the wing in with his/her back hand causing the wing to be completely square with the wind. With the wing pointed straight up towards the sky the canopy catches the maximum amount of wind but doesn’t generate the maximum amount of power. How can this be? Well, part of getting up on foil requires lift from the wing, requires angling the wing rather than keeping it vertical. By angling the wing you can generate more power because you make yourself lighter. Just like an airplane taking off you create negative pressure on the top side of a wing which in turn causes lift that allows the foil to activate at a lower speed. This can be achieved by pulling in your front hand and extending your bottom hand. Combine an angled wing with pointing the wing between 12 o’clock and the direction you want to travel to practice powering up the wing.

To improve the bottom end of your wind range it is crucial to learn how to pump the wing. This is another technique that new riders seem to struggle with. Many people tend to pump the wing with only his/her bottom hand. This is problematic because this movement only changes the angle of the wing instead of creating power. In order to create power you should pull in your wing with both arms in a rhythmic motion that is just fast enough grip the air. By practicing pumping you can start to figure out the tempo needed to generate power.

The next big thing to work on is switching hands and moving wing around without powering it up. When we first starting wing foiling we found it challenging to get stay balanced on the board because we would constantly power up when switching handles and pitch off of our boards. We quickly realized how monumental this skill was to master. You can avoid this issue by practicing switching your hand positions on the wing without powering up the wing. Practicing this skill is much more forgiving on land because the ground doesn’t move beneath your feet. It may seem like an easy skill but even a small pull with your bottom hand will cause the wing to catch the wind and pull you forward. Keep the wing above your head and practice switching hands while focusing on keeping the wing in a depowered state.

This is a skill that could make or break your first water session. Many times when you fall the wing flips over and lands belly up in the water. If you can’t flip the wing over then your session will be over. To prevent this practice flipping your wing over on land. While standing, it is easiest to hold the wing by the depower handle in front/above your head and use your free hand to push down on the leading edge. The other method we recommend is grabbing a wingtip, then bringing the wing into the air and flipping it over. Once you are comfortable with these motions, try flipping the wing on your knees, and then in a seated position. Even though it is easier to flip the wing while standing, in the water you will most likely be on your knees or seated on your board.

The Waterstart On Land

Congrats, you have made it to the final land-based drill. Replicating the waterstart on land is the best way to boost your confidence and skills when you hit the water. You will start out on your stomach with the wing downwind of you and not in your hands. Get to your knees then pull in the wing by the leash and flip it if it needs to be. Grab the wing by the depower handle and transfer your hands to the center strut handles with the wing in a depowered state. Next you will sheet in and power up the wing, then you stand up and start walking crosswind while maintaining power in the wing. Transitions can be practiced as well by walking in one direction with a powered wing, depowering the wing and switching hands, then walking in the opposite direction. If you want to get a feeling even more similar to the water then grab a skateboard. We recommend wearing full padding including (but not limited to) a helmet and wristguards. Although you cannot start on your knees you can still feel how different wing positions cause speed differences. With a depowered wing step on the skateboard and begin to slowly power up the wing. If you begin to accelerate faster than you feel comfortable with, simply let go with your bottom hand. This will cause the wing to depower and will hardly catch the wind. If you let go with your front/top hand the wing will fully power-up which is something you want to avoid at all costs. And if you accidentally let go with your front/top hand let go and the wing will depower via your wrist/waist leash. 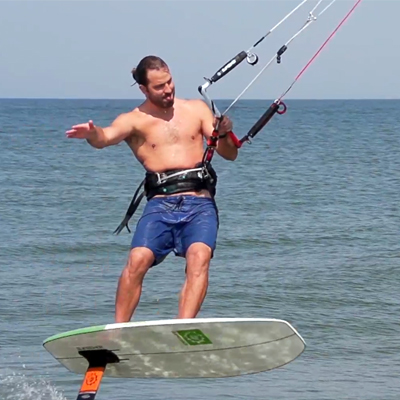 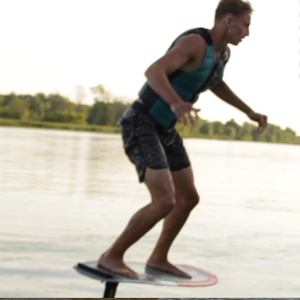 
MACkite team rider and foil guru. Cole is an avid wakefoiler, kiteboarder and a talented athlete all around. He's knowledgeable in all things hydrofoil and stoked to help others learn. You can catch him at the shop helping out on the phones or ripping on the water most days of the week.