Slingshot went back to the drawing board for 2020 and has brought us two brand-new kites - the Rally GT and the Raptor. Many are wondering - who are these kites for, and what is the difference? We've spent some time on both kites and have developed opinions on what we feel the differences are. In this short comparison, we'll sort out those differences and help you make the decision - Rally GT or Raptor?

We'll cover some basic flying characteristics of each kite, broken down by category below.

The Rally GT and Raptor are quite different in their ideal wind range for performance, I feel. The Rally GT feels like it has a bit more low-end (and behaves better when winds get light due to it's three-strut design) than the Raptor (with a heavier five-strut setup). I think they have comparable top-ends. The main difference is where the kites like to be flown. The Raptor really prefers to be powered up - especially if you're going for big jumps and loops. The Rally GT doesn't mind the lighter winds, as it still has a good bit of grunt down low.

To put it in terms of numbers, let's use the Rally GT 9 and Raptor 10 as an example. We have demos of both of these kites, so it's an easy and practical comparison for us. I weigh 185, and have been riding a Duotone Select 138 with straps (that I absolutely love, BTW). The Raptor 10 really becomes fun around 22 knots, on up to upper 20's. The Rally GT 9 works from 18ish to the upper 20 knot range as well. I'd say ideal wind for the Raptor is 25 knots, where ideal on the Rally GT (for general freeriding) is 22.

Both of these kites have a similar amount of bar pressure, I'd say - maybe the Raptor has a slight bit more. The Raptor has a very smooth and slow-turning attitude and a very powerful feel in the bar (especially when you're turning the kite). The Rally GT is still smooth, but I'd say it has a much more direct and snappy feel than the Raptor. Sheeted out, the Rally GT dumps all of it's power, where the Raptor feels like it doesn't depower as well in the bar - it definitely does, it's just more of a feel thing. Both of these kites can be ridden quite powered.

For beginners and intermediates, the Raptor is going to absolutely launch you. It's a very user-friendly jumping kite, something that I think many people are going to enjoy. It remains stable throughout the entire jump, picking you up quite aggressively and letting you down softly due to it's open canopy. The Rally GT requires a bit more finesse to get it to launch good jumps, something the intermediate and advanced rider should have no issue with.

Both the Rally GT and the Raptor are quite stable kites. They don't tend to overfly, and behave quite well when depowered without having the hint of backstalling. The two kites are very good at eating up gusts as well, allowing you to fly them quite overpowered. They don't have a surging feel in the bar, allowing you to really focus on riding rather than getting your shoulders yanked around. In light winds, the Raptor seems a bit heavy in the sky, where the Rally GT can manage itself much better.

The Raptor is going to miss the mark in this section. It turns slow and with loads of power, has a heavy feel, and would fall from the sky if the lines become slack. The Rally GT on the other hand can perform quite well in the waves. It turns quickly and directly, has a good bit of power, and relaunches immediately. I wouldn't necessarily put the Rally GT up with the SST in terms of wave riding performance, but it can definitely handle the waves better than the Raptor.

If you're going for massive, powered kiteloops like you're going to love the Raptor. It launches jumps and loops with loads of power. The Rally GT has a bit less powered and tighter loops, which make it a bit easier. I tried some basic loops on both kites and the Raptor was a good bit slower to get the loop around versus the Rally GT.

Someone with a bit more megalooping experience should chime in on this one, as I'm not the one to pull big loops at this point in my kiteboarding career...can you say, chicken??

I'll wrap this up with one final thought. These kites are actually quite different, but the same rider could enjoy them if used for different applications. For higher winds, the Raptor really enjoys sending big jumps. I'd consider adding an 8 to my quiver for the nuclear days. The Rally GT could be a great kite to build a quiver with. A 14 for lighter winds, a 12 for all around, a 9 for all around and wave riding, and a 7 for high winds and waves (and foiling!). Overall, they're both really good options to choose depending on your riding style.

As always, the Versus series is an open forum, where we welcome feedback. If you have anything to add, please let us know! 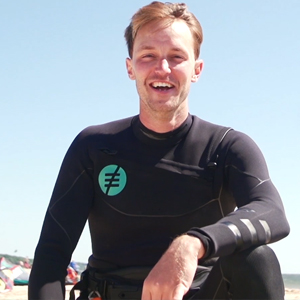