Hydrofoil kiteboarding has been on fire lately at the shop. I cannot remember the last time where every employee was so excited about one aspect of kiteboarding. Every employee from our young guns to shop legends caught the foil bug. As a result, we have seen a dramatic shift in the kite quivers chosen by our staff. Our quivers were dominated by large freestyle kites like the Cabrinha FX; now, we are switching to kites that compliment the unique challenges of foilboarding. These kites can be broken down into three categories: surf kites, single strut, and ram air kites.

While most kites will work for foilboarding, we've found these categories to be the most beneficial. Within these categories some shop favorites have emerged. Obviously there are plenty of good options within and outside of these categories. All that said, these are the kites that have resonated the most with us here. 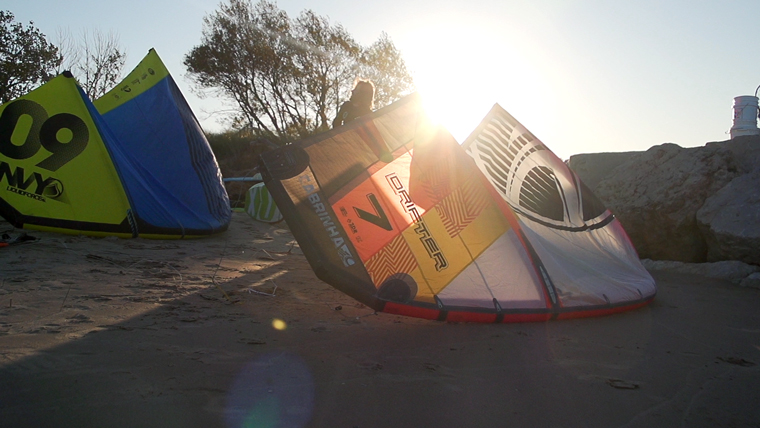 Tucker is always on dawn patrol for a kite, surf or foil session. His kite of choice is the Cabrinha Drifter

Surf kites are the most popular  kite choice for foilboarding for many reasons. The first and most notable is their purpose built “downwind drift”. Downwind drift is best described as the ability of the kite to fall downwind when the control lines are not loaded. This results in a slight kite pull when traveling downwind. Also, riders notice the ability to steer without kite power as well as not falling out of the sky when moving downwind quickly. Since kitesurfers and foilers frequently move downwind fast, downwind drift allows riding to be simple and free. Their tendency to sit further down in the wind window also makes them easier to stay aloft in light or gusty winds. One downside to downwind drift is its diminished upwind and jumping ability. Luckily, foilboards and surfboards ride upwind well so it is a non-issue in most instances. 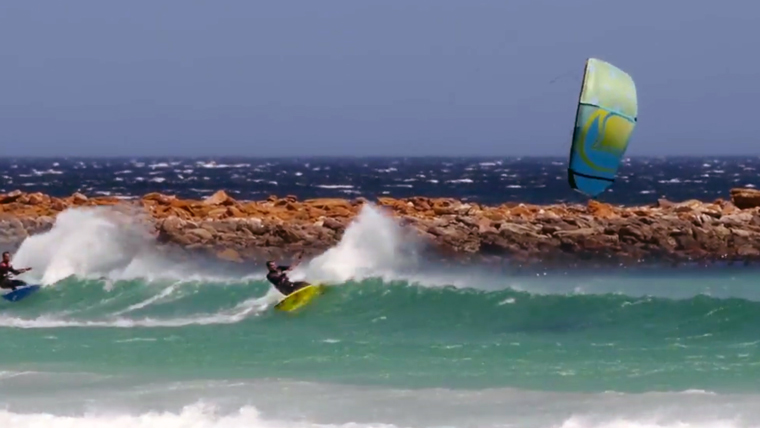 The characteristics of a good surf kite lend to a good foilboarding kite.

A second benefit to surf kites for hydrofoiling is their turning speed. Like kitesurfing, hydrofoil kiteboarding needs fast changes in kite direction. This accounts for bursts of speed and direction changes that the foil allows. Experienced foilers often find themselves signing, looping, and streaking the kite across the window in the same tack. The faster you can adjust your kite, the more aggressive and free your board becomes. It is important to note that the turning speed allows riders with some experience to ride smaller kites since they can create quick bursts of power on demand when needed.

A third benefit is how surf kites deliver power. Surf kites tend to have the smoothest power delivery of any kites on the market. This is due to the fact that they are predominantly designed for kite surfers who ride strapless. A jolty or punchy kite can pull a strapless rider off their board or reposition their feet. Conversely, a smooth power delivery for kitesurfing or kite hydrofoiling gives the rider confidence when riding and allows more aggressive kite movements without the fear of getting yarded. This is especially important with hydrofoils as more balance is required and burst of power can speed up the hyper efficient craft. 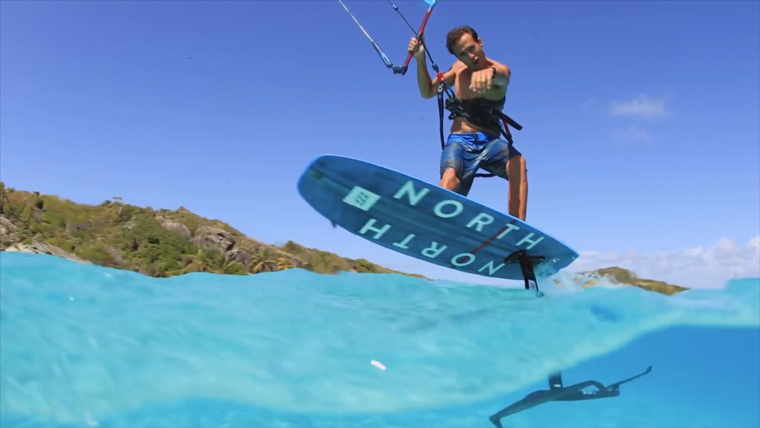 The North Neo is another shop favorite for foilboarding, surfing and freeride around the shop.

Two popular kitesurf kite choices for foiling are the  Cabrinha Drifter and the North Neo. The Drifter and Neo both display the characteristics mentioned but also have differences that suit different types of riders. The Drifter, as its name would state, is hands down the best downwind drifting kite on the market. This year, the Drifter has an expanded power range when in its offshore bridle orientation for better upwind and jumping ability. The Neo does not dirft downwind as well as the Drifter but still drifts downwind better than other kites on the market.

The Neo is more powerful than the Drifter and riders will often choose to drop a meter or two in size. This allows the rider to not become overpowered with the apparent wind created by the foil’s efficiency. The Drifter and Neo are both excellent kites but are often chosen by different riders.

Typically, freeriders with a loose style will choose the Drifter while riders who prefer a more “punchy” feeling kite will choose the Neo. Other kites such as the Naish Slash, Airush Wave, Slingshot Wave SST, and Liquid Force WOW are also popular choices. We'll dive into these in later videos. 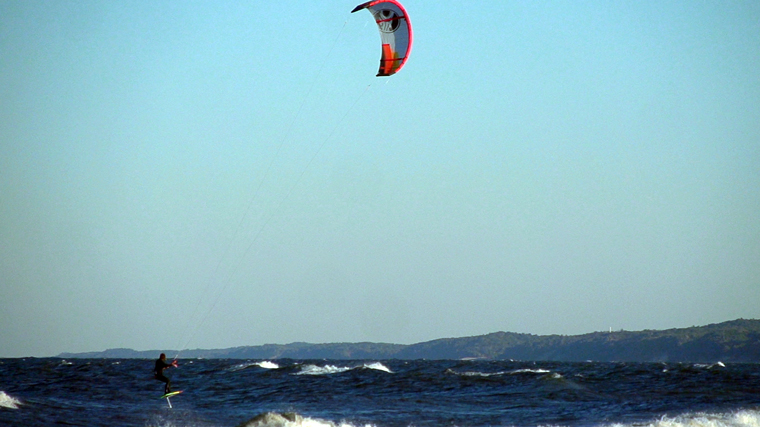 Another popular kite category for kiteboard foiling are single strut kites. Purposefully designed to be a lighter kite, they fly well in winds where their heavier counterparts struggle. Because of this, single strut kites are often chosen for lightwind riding in sub 12 knots. Weight is important for lightwind hydrofoiling because the efficiency of the foil allows for upwind riding in situations where other boards would destine you to an upwind hike after. These kites tend to have powerful low end to aid in those light wind board starts and provide good kite pull for their size. They are quite efficient upwind and as a result need more tactical riding downwind to keep from falling from the sky. 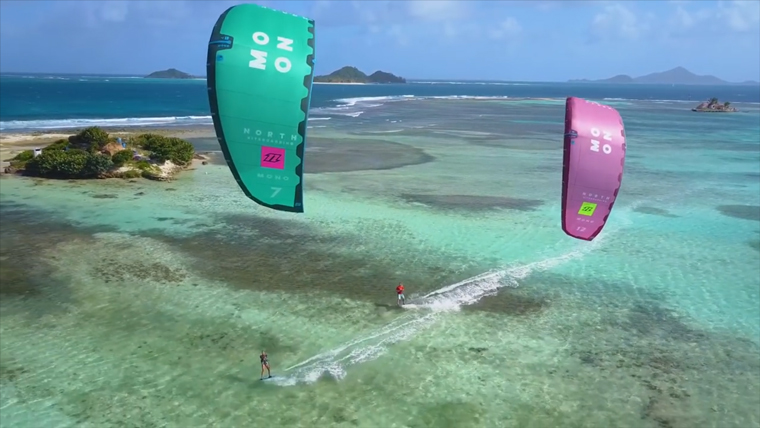 Single strut kites are the best tool for the lightest of days making them an obvious choice for foilboarders.

There are a number of great single strut kites available now and they all have their own benefits and tradeoffs. That said, the category as a whole shares consistent attributes that lend themselves to foilboarding. Some of our favorite kites for 7-12 knot days include the  Airush Ultra, Naish Boxer, North Mono, and Liquid Force Solo. These kites all fit this need with some small differences between them. The lightest kites in this group are the Airush Ultra followed by the Naish Boxer and North Mono by a few ounces. The Liquid Force Solos is the heaviest kite in this group but it still comes in lighter than any kites with multiple struts and has an affordable price.

In future videos we'll likely do some versus videos between all of these kites.

Our third and final category for foil friendly kites are Ram Air foil kites. Typical kiteboarding kites are LEI, or leading edge inflatable design. Rather than pumping up a bladder, the Ram Air kite design includes a dual canopy design with “cells” between that fill with air using the wind. This kite has a lighter weight design as well as a “foil” curve along both the inside and outside of the wing. This results in a more efficient design. These Ram Air foil kites require more bridles to help support the wing and hold its shape. 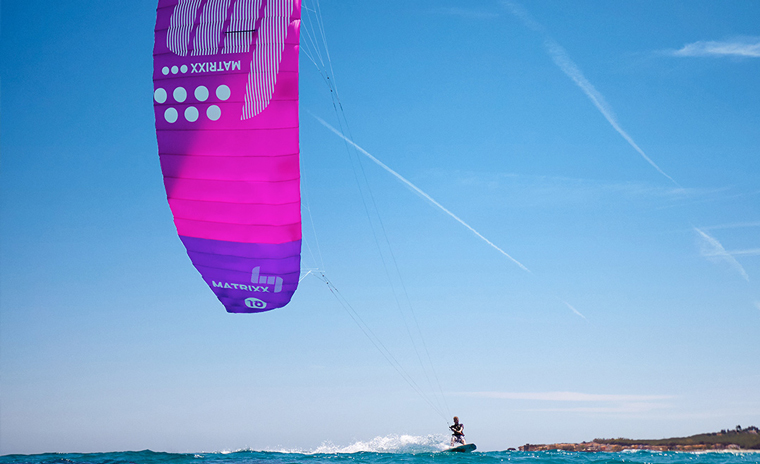 As a general rule, we ride Ram Air foils only in the lightest of winds when other kites will not stay aloft. For most of us, this includes winds 4-8 knots paired with a 12-18m kite. Most Ram Air kites are very high aspect. As a result they are difficult to fly and have the unfortunate tendency to bowtie or fold when they lose adequate line tension, a common occurrence in light winds with variable gusts. 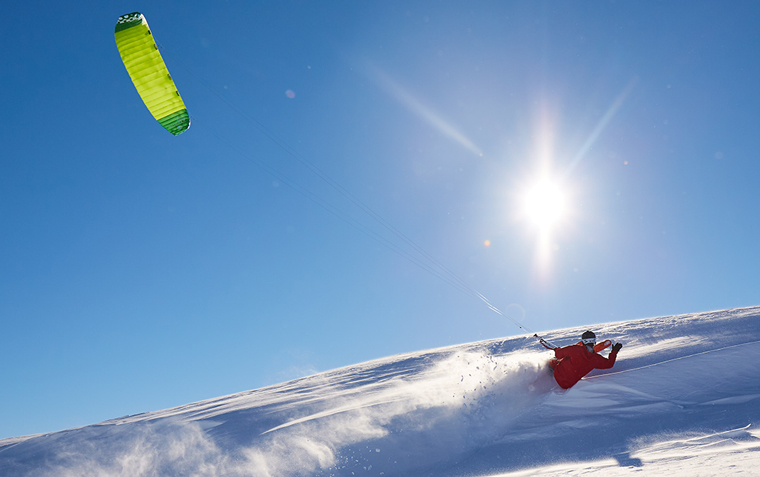 A popular choice among snowkiters and now foilboarders Ram air foil kites are here to stay.

A kite we love for super lightwind sessions is the  HQ4 Matrixx. The larger sizes of this kite are built with extra lightweight materials and has a weight one third that of similar sized leading edge kites. In addition to being lightweight, the Matrixx Ram Air foil kite has a low aspect design that is designed and optimized for foiling. This means that the kite sits further back in the window and has more kite stability and improved downwind riding abilities. Also, the Matrixx can be flown using most four line bars on the market. That will save you a smooth $400-550 on a dedicated foil bar that most Ram Air foils need. To put it simply, the HQ4 Matrixx provides superior foiling performance and ease of use, all at a price that puts the competition to shame. 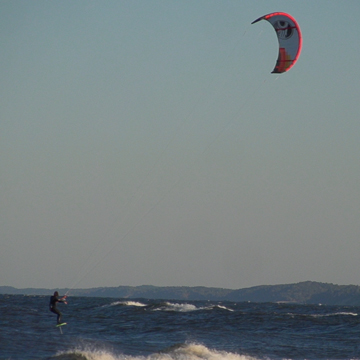 MACkite's resident surf and "Foilboarding junkie." You can either catch him on the phones or on the water at dawn testing new gear. he is proficient at a myriad of sports, a shaper and passionate about getting his water time. When he discover kiteboarding it took over as his predominate sport. The Same could be said about hydrofoiling.