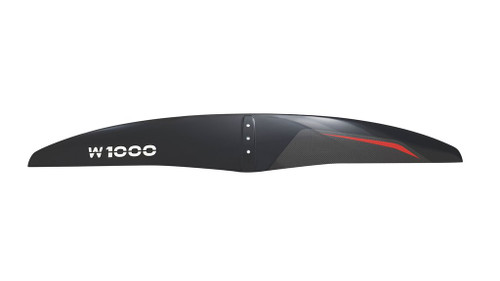 Large, with a high aspect ratio means you get super early lift while retaining pumping power, top speed and maximizing glide.  This foil is a speed demon that loves tight yaw turns, drawn out rolling turns, and blasting downwind on waves.  When you are ready to up your wing foiling, pump, or windsurfing game, this is the foil.  Our favorite stabs for this wing are the 400, 330, 425, and 470.

This wing requires the 647 Kite fuse, 1150 wind fuse.  Contact us if you have questions.

After riding the 330 stabilizer my first session, I slapped on my 425 stab yesterday.
I've ridden the Moses 1000 now 2 days in a row and I must say it is by far the most epic foil I've ridden. Here is a quick review...

Comes up on foil quickly and easily. Very, very balanced at speed. Hums like no other (I've heard I need to tune it). Pumps like no other. I am nearly to the point where I can pump it indefinitely and don't need the wing anymore. Getting a lot closer. Never thought that was possible although I see it in vidoes. Roll is terrible - takes some getting used to. Terrible in the sense that it doesn't roll as easily as my 790 or more surf oriented foils, or at least it is much stiffer (no kidding, right?). By the second day I was able to ride without falling for over an hour, jibing continuously, so it just takes some getting used to. What I like is when jibing, rather than making a tight radius turn you simply widen the arc, but the glide and speed make it so on the big arc you can park the wing, fix your hair, move that leash out of the way, turn and look at the beach to make sure no one is messing with your vehicle, flip the wing, then power the wing. The glide is just amazing. If you want to get playful you have to work the yaw instead of the roll.

Of all the foils I've ridden the 1000 is now my go to foil. Super fast, incredible glide and pumpability. I will be swapping out my 72mast for one longer because I did start breaching the wingtip from time to time. But I love this foil!
View AllClose

SABFOIL/Moses 330 Rear Wing Stabilizer All Around

MSRP:
Now: $292.50
Was:
Moses 330 Rear Wing Stabilizer All Around A thicker profile and medium winglet for the 330. if your goal is to stabilize your foil at high speed this is what you need. More drive for your long run...