I'm Tucker, and today we're going to talk to you about the Triton Monofoil. If you haven't seen this foil yet, it's one of the most innovative designs we've seen in quite a while. Totally different from a lot of what you're seeing out there in the industry or ridden before. I will show you a little bit about it and review it after riding it this summer.

The components consist of; the front wing, the fuselage, and the stabilizer. The front wing is a wild-looking trapezoid wing. The Triton T1 MonoWing also comes with a complete foil set made of a really nice aluminum mask that makes it lightweight and solid .

Interestingly, for this entire kit, you can buy it just for the front wing and adapt it to your current mask . This kit fits on a lot of the aluminum masks in the industry, including slingshot, and also as an adapter for Carbon Moses or Saab foil carbon masks.

If you don't already have a mask you’d like to use, the Triton mask is solid. It fits perfectly with the front wing and is relatively light and stiff for its size.

The Triton T1 MonoWing aims to remove the need for a stabilizer from the equation. The back end of it flips up. It's almost like a little flip at the end that acts like a stabilizer and gives you a lot more stability and predictability, making it much easier to ride and be behind your back foot. It's just a lot more intuitive with how you turn and where your weight distribution is over the foil. It makes it that much better than any other monofoils I've ridden. The Triton does solve some of those issues with monofoils

At 205 pounds, I could tell immediately that this foil was a bit small for me in this design. I need quite a bit of power from the kite. Once I get on foil and speed up, there's not a lot of extra range to it and the high end. But that's not necessarily a bad thing on a freeride foil. It's excellent in the waves . It's not for racing. It's not meant for down winding or surfing on a prone board.

The Tritone MonoWing is fun but has a limited range in terms of speed. It’d be much more fun if I were either lighter by 20 or 30 pounds or the wing was a little bigger. Hopefully, we'll see bigger wings in the future. That might be interesting. Try to get a little more range for somebody heavier like me.

Nevertheless, for most riders out there, you’ll find this foil is loose and playful. You can point it wherever you want without any hesitation. There's no tackiness where it wants to go, where it's pointed, you can slide it, you can definitely bank some high-speed high G turns in the waves if you’re ripping fast . You can rip quick, very tight turns.

I would say this foil is limitless in terms of turning performance. The only downside is that there's not many glides. If you're not having kite power or wave power pushing, you will decelerate quickly. Additionally, since you don't have a lot of high range, there's not a lot of room to go before you hit that stall speed.

You want to make sure you have a kite and some good power, have a good lift and ride the waves or fly your kite in a way that you have consistent kite power. Don't think you're just going to scream down-wind with your kite above you because you're going to really decelerate quickly and drop off foil.

In attack, you might think that makes it really hard. Here is the trick: you have to make a tighter and faster turn than you would with a normal foil because you can't just glide through it. But since the turning radius redirects this foil, you can also do a quick little flip around and go the other way.

Keep that kite high to create a lot of lift, or you can loop the kite through that to make your acceleration go as you're going through the turn. But you want to ensure you have a consistent power source, whether from the kite or the wave beneath you. 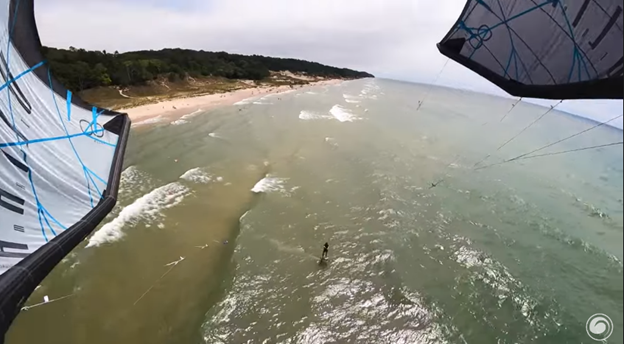 The number one thing I found this foil is awesome for me is riding kitefoiling in the waves. If you've got a little overhead wave, this foil will just rip turns at full maximum speed right in the face without many issues. In contrast, a lot of other foils are going to accelerate too much or just get too tracky at those high speeds.

The Triton T1 MonoWing has a bit more limited range and limitless freedom of movement in terms of how you turn. You can just bank a high-speed turn and rip it. Almost like a little skateboard across the wave phase and back and forth across the wave. As long as that wave has decent power to continue to push you and keep you going without a lot of need for that extra glide. And then, you have to navigate your kite accordingly to keep it in the sky and make sure you keep tension in your lines.

The Triton monofoil is definitely for a very niche rider. Has a limited speed range for heavier riders . The build is top-notch. Good job for the guys at Triton. I can’t wait to see what you guys come up with next.