The Duotone Dice and Rebel are two kites that are completely different in design, on the water and in their approach to the different disciplines. There are aspects that cross over, leaving people confused on which kite is right for them, like big air, high performance and a "rip you off the water" feel. In 2020 the Dice has some re-designs while, aside from material changes, the Rebel is the same.

Rather than doing reviews, I thought it would be more valuable to cover the changes... all the differences and our experiences on theses kites. Let's start with what the kites are.

A comparison of the Duotone Rebel and the Dice

Kites at a Glance

The Rebel is a modern take on a classic design. It's suited for kiteboarders who want massive air, greatest hangtime and ease of use... all this while not compromising on high performance or a crisp, rip-you-off-the-water feel. Now, don't be mistaken, the Rebel does not do it all. It's a specialized kite designed for a specific purpose. There are things that you give up. In contrast, the Dice excels at these trade-offs, making the choice between these kites pretty clear if you know what you want on the water.

The Dice is what's known as a crossover freestyle kite. If you've followed this series for a while, you know I'm a big fan of this category. It has many of the same benefits of the Rebel, but it requires more skill to use. You lose some desirable traits like loft but, all in all, this is a far more versatile kite.

There is no comparison here. The Rebel rides upwind better, easier and has a much larger wind range, meaning if the wind picks up or dies off, you'll be able to stay on the same size kite longer.

The Dice isn't out for the count on this one, but it does take more skill. If you're experienced, you can make it work in lighter winds and hold it down in stronger winds.

Between the two, I get overpowered on the Dice faster. When the wind gets light, even though the Rebel has a larger range, I prefer the Dice. It takes more effort but it's more maneuverable and fun. The Rebel, in contrast, is user-friendly and requires nothing from the rider, aside from minimal sine-ing. When lit, I'd take the Rebel. You can get serious air and maintain a more comfortable de-power.

The Dice Has Lighter Bar Pressure

Again, there is a lot of contrast here. The Rebel has more bar pressure the Dice is light, playful and snappy. Duotone describes the Rebel as "crisp". That's actually accurate, but if we're going with that word, the Dice is crisper. The main difference is that the Rebel is less direct. It's a forgiving kite, so even amateur kiteboarders can experience a direct, crispy feel.

The Dice has some changes for 2020. They have modified the bridle and removed some pulleys. The changes do impact the kite on the water, although not enough for a solo Dice review this year. Last year's review holds true for this iteration with the minor change in feel.

In previous reviews, I've spoken about how the Dice needs an experienced rider to maximize the kite. This is because the Dice acts as an extension of the rider. With the Dice, you feel everything. The good, and the bad. The good is that you feel exactly where the kite is and what it's doing, and it will respond to a flick of the wrist. It's by far one of the most fun kites you will ever fly. The bad is that you will feel gusty wind more. In flat water you won't notice it as much. In chop, that's a different story.

This is actually by design. The Dice responds to feedback, not only in the bar but from the rider and the edging of your board. In choppy water and gusty wind this compounds. If you don't have good edge control or experience flying the kite, you can accidentally load and unload the kite.

The kite is designed to do this for unhooked riding, so with the micro loads, it can be a bumpy ride, at least at first. In my first year riding the Dice in choppy water, it was extremely noticeable for me. My second year I hardly noticed the difference in choppy water. My point is that you will get used to the kite and learn to control it in these conditions.

Between the two, it's up to you. Both have a snappy feel. One, the Rebel is more locked in and controlled; "autopilot", as I always say, while the Dice is the opposite. To clarify, the Dice is a far cry from its freestyle predecessors. A new rider could still learn on one, though the Rebel or Evo would be easier. On the Dice, a beginner's progress would be slower while an intermediate would progress faster.

The easy answer is that the Rebel jumps higher and longer. The real answer is: it depends. Experienced kiteboarders could get as much air and height.

If they know how to heli loop, they could get as much loft. See what I'm getting at?

By default, the Rebel jumps easier. Like the classic Rebel, it rips you off the water and if you're new to the kite, you will be surprised by how much air you get. The style is different. It's more of a glider. You won't have to do anything except commit to sheeting in. It's designed to appeal to old school kiteboarders who like board-offs and hooked in big air tricks.

The Dice, in contrast, is aimed at someone who wants something more extreme. It's for someone who wants to get sendy with the kite. Downloops, kiteloops and heli loops are this kite's specialty. Like I mentioned earlier, you have complete control of your experience, from how you load and release to how you send or flick your kite in the air. By default, the Dice has a lot less loft than the Rebel unless you do something about it, like a kiteloop or a heli loop.

This comes down to what you like. I much prefer the Dice. I know there are loads of you out there who would disagree. The Rebel has had a cult following for years. If you're into big air, it's a unique kite that feels and acts different than all other big air kites. In fact, in the 2020 season there are a couple new big air kites to choose from, yet none of them have the unique traits of the Rebel. It's a stand alone kite. The main takeaway is that the Rebel jumps easier, it's got more hangtime and it rips you off the water, while the Dice is more interactive, dynamic, poppy and explosive.

Till Eberle has no problem looping the Rebel

There is no competition here. Can you loop a Rebel? Of course! I've seen plenty of videos of it online. Personally, I'd take the Dice 10 times out of 10. It's designed for riders who want to do kiteloops of all levels. We even included it as a top pick in our "How to Kiteloop" playlist on this channel. I do want to point out that the powered loops, meaning loops not done at the edge of the wind window, are explosive and powerful. If you want a fun, super easy kite that loops with less power, go for the Evo!

With the Rebel, you can still do simple downloops and other loop-based tricks, but it's not the right choice for massive loops or riders who want to make looping a main part of their kiteboarding.

The Dice is more versatile. It's a crossover kite with wave capabilities. This type of design has been around for a few years, but none have ever been that great until the Dice. While it's not the best performer in onshore conditions, in side and side-off waves, the Dice is a ripper.

Unlike wave kites that drift, you have to be proactive with this kite and always keep a little focus on it. That said, it's super fun in the waves. The lack of grunt keeps you on the wave. The direct feel lets you know where the kite is via the bar. The direct and instant response of the kite lets you steer the kite in an instant. This allows you to put the kite where you need it while surfing.

Of all the crossover freestyle kites available, the Dice is the best performer in the waves.

The Rebel works, but in some instances it can backstall. I mentioned it's a modern take on a classic design. For sure, there are people out there who know how to use a Rebel in the waves. I'll say it would be my absolute last choice if I was going to surf. Granted, I have used it in a pinch. I'd rather use it for boosting off wave kickers than dropping in on a surfboard.

Again, the Dice is a clear winner here. It's one of the best performing freestyle kites I've used to date. Riding for MACkite, I get to pick my quiver for the season and the Dice was my personal kite for a huge chunk of 2018 and 2019. If you follow this channel you know I probably give this kite too much attention.

With the Rebel, you can unhook. In the product video, one of the first shots you'll see is someone throwing an unhooked trick. I've said it before; you can do almost anything with almost any kite, but like the waves, the Rebel would be my last choice for unhooking. It's not designed to be flown unhooked for long. It's also easy to backstall unhooked if you're not perfectly powered or you don't trim it correctly. Some of you may disagree, but my experience unhooking on the Rebel has been unsatisfying.

I hope this review has given you some perspective on how these kites stack up. Each kite is for a specific rider. Choose wrong and you'll be missing out. The Rebel is for riders who want the easiest kite, the biggest jumps, and the most loft. It's a true specialty kite for old school riders or those of you who only want to send it. It's the only user-friendly kite you'll find with this massive wind range and distinct rip-you-off-the-water feel.

The Dice is for riders who want to do it all and have the experience to get the most out of this kite, the rider who wants absolute control over their kite, the rider who is willing to trade ease-of-use for all-out performance in most disciplines. In other words, king of the air mega loop style jumps, wave riding, and hooked or unhooked high performance freestyle. 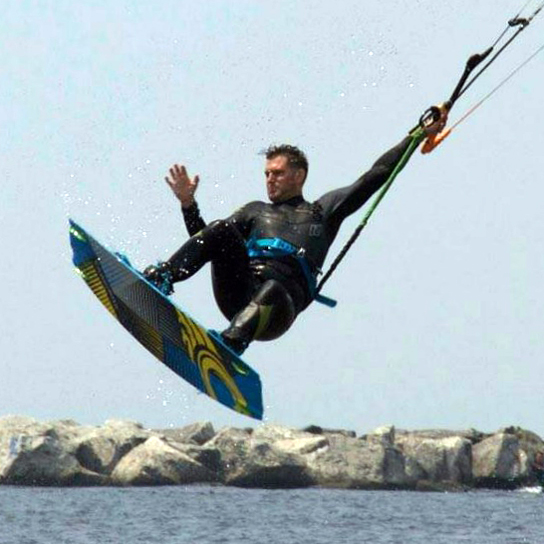