For about a year I bashed winging, mainly because I agonized over schlepping around big boards again like back in the windsurf days, now being in love with the small boards kiting and kite foiling allow. 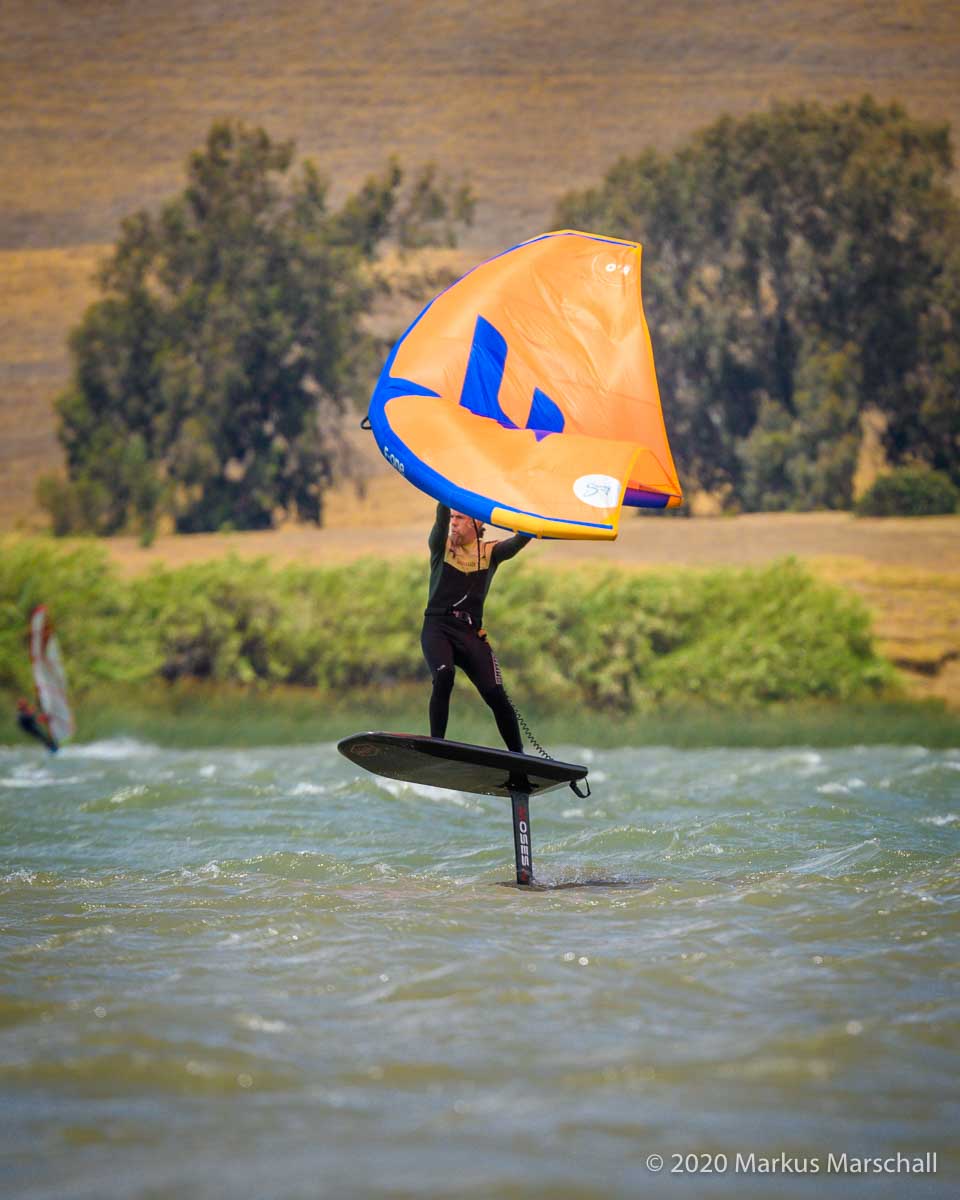 But I finally caved after hearing so many stories citing “it is so fun” and I bought a wing… The rest, as

they say, is history…

Day 1 - I was eager to get going when my F-one Swing wing arrived, but I had to wait 3 or 4 days due to bruised ribs

from a hydrofoil crash at speed. But once the ribs were tolerable, I pumped up the wing, did a 10

minute “get the feel of it on the beach”, then grabbed my 10’ sup board (with no foil) and headed out

in about 20 knot winds. Standing up or “up-hauling” with a large board was fairly easy, and I was off.

started, so I decided then and there to do a down-winder, and I started riding large swell, and planing,

and it was honestly pretty easy. I didn’t switch my feet, just down-winded on swell heel-side and toe-

thinking I’d never make it upwind, but by employing my old windsurf upwind technique I was able to

not get washed downwind. Basically I’d walk up to a point on the beach, head out, do a make shift

jibe, fall half the time, then pinch to make it back where I started, where I’d jump off the board, rest,

and manually spin the thing around. Then I learned another trick. Rather than trying to force the

board around to jibe, if you switch your hands on the wing and spin it 180 degrees, the board will spin

to the other direction. That is a trick I now use on my sinker board if I’m off foil and want to change

directions. So day 2 constituted of about 20 “laps” on the sup, with an attempted jibe on the outside

this right, so I grabbed a paddle and took the board out with foil, and I just paddled around. It felt

very different from the paddleboard. Very awkward! After that I grabbed the wing and schlogged around for

quite a while. Going upwind now was much, much easier since I had so much foil / mast under me.

Although I wasn’t foiling I could at least ride and get the feel for the foil and wing combo.

getting into position to foil was pretty easy, but trying to pump that wing and get going was tough.

Several wingers yelled commands at me, and what I found helped the most was to raise my front hand

as high as I could, pump with the back hand, and start with my feet forward on the board, and as my

board speed increased I would scooch back towards the tail and get on foil. Easier said than done! It

took some practice for sure. And, it is much harder in light wind. In stronger winds you barely need to

pump and you come right up on foil. But today was blowing 12 and it took some work! However, once

up on foil all the hard work from the previous few days paid off, and I was foiling. Once settled in on

foil everything was simple. The wing feels light and you can rest once up and going. Since I can’t jibe

my feet I’d come off foil to turn, and turn the board and jibing my feet was something I’d already

Day 5/6 – By now I could get on foil and ride, but really couldn’t jibe on foil to save my life. But, it

ended up taking 3-5 days to learn how to jibe. First it was 3 jibes completed in a session, then 5, then

more and more until you just quit counting. What helped me the most was first just ignoring the wing,

lifting it as high as I could to get it out of the way, and concentrating on riding the board. What I

learned is that even if you come off foil, the boards are floaty enough that you continued to ride and

pump back on foil. But ride the board, ignore the wing at first. And, look for swell to jibe on. If you

can get into a swell for jibing it will carry you and keep you on foil.

125L board. I loved that board and have fond memories of it. But the new 5’4” looks so sleek and shiny,

all the cool guys doing knee starts. I try one and really, they are super easy. Get on your knees, fly

the wing overhead, put your front foot up near where it goes and stand. Pretty easy. I found the 5’4”

to be more responsive, yet super floaty, easy to ride, easy to transport and just a lot a fun. The

second week I just kept working on pumping up onto foil and being more consistent with my jibes.

Little by little is just got easier. While on foil I could just ride and work on little technique but was

otherwise mindless (technique like keeping my back arm straight, not bent, and twisting as much as

possible to go upwind). I struggled with pumping onto foil on my weak side, but felt super comfortable

pumping onto foil on my strong side.

Day 15-21. Back in the foiling days, and kiting with a surfboard, I only rode toe-side on port tack. I

toe-side rather than riding switch. I found that I can pump onto foil better toe-side than heel-side on

my preferred side. Pumping onto foil toe-side is actually very easy! By now I could usually ride an

hour without falling on jibes. Another trick that someone told me was to aggressively spin the wing

with your back hand when jibing, before you change your hands.

Now, while on a reach, I can just stand there, look around, think, watch others, and not have to give

any thought while riding. Same with jibing, although it still requires a tad more concentration, but not

much. It does get pretty easy.

Yesterday I had my best session yet. Wind was blowing 25. I finally got up the nerve to let go of the

wing and hold only the neutral handle, and to foil on the swell! I can’t believe how fun it is! What an

incredible feeling! Finding large swell, letting go of the wing and surfing the swell and pumping a tad

to connect to other swell! It is what I’ve been dreaming of since I started. It is pretty awesome and

Unlike other sports, the learning curve for winging is fairly short and it really is a blast! 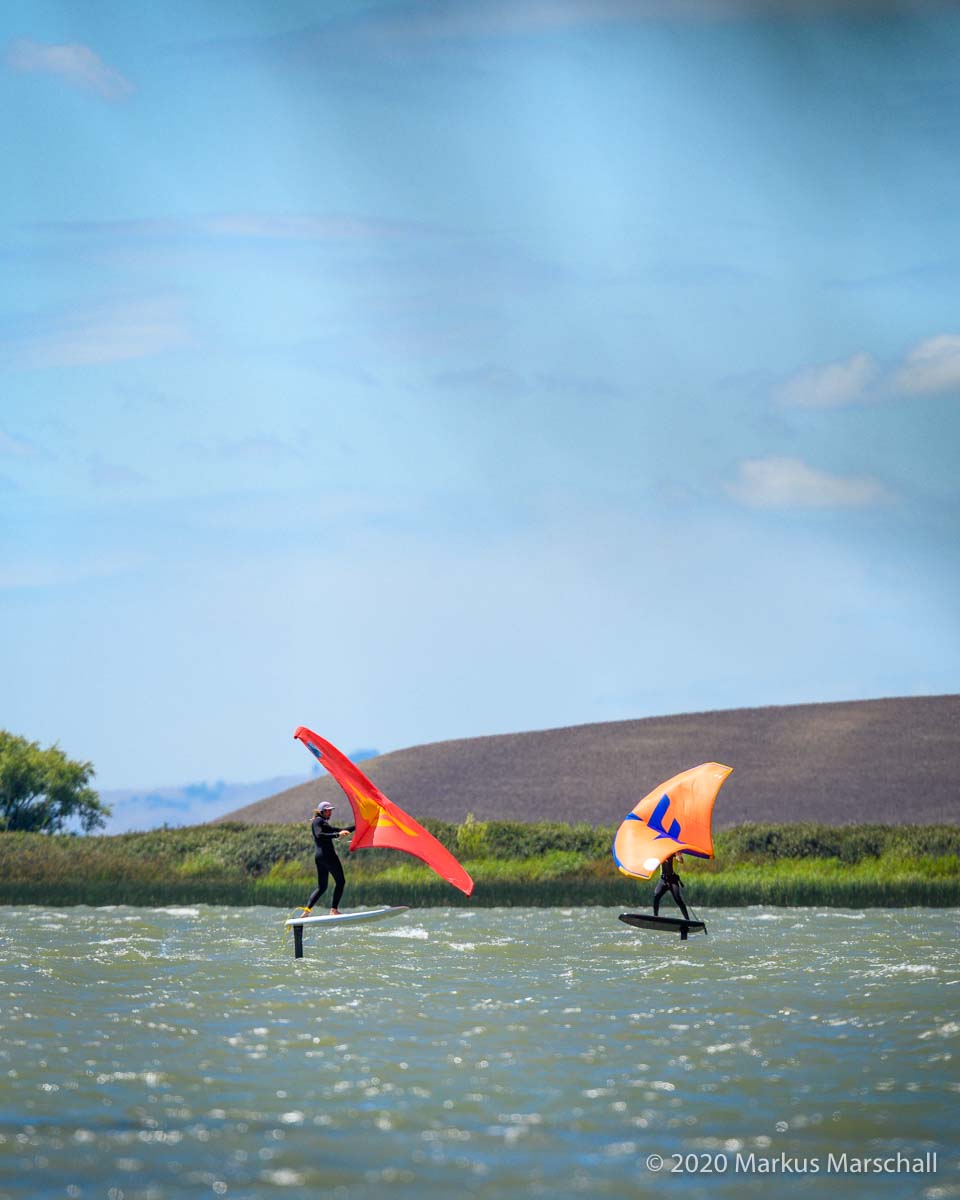