The FX has been a shop favorite since 2016

Today I’m going to be discussing with you the all-new 2018 Cabrinha FX.

All new...what does that mean? There’s a bunch of design changes that have been made for the 2018 FX that are marked improvements over the 2016/17 models. This is pretty hard to do, as the FX was already one of our favorite kites for freeride and advanced freestyle. Cabrinha has increased it's capabilities. There’s three different settings that can be adjusted in the bridle, two of which are vastly different from the original FX settings. The middle setting, known as the “Kite Loop Setting,” is pretty much the same as it was on the 2016/2017 FX. It’s still got that same pop and the same freestyle/freeride capability.

On the more freestyle edge of the spectrum, the FX has been advanced so it flies further forward in the window. What that allows you to do is land more of those double handle pass tricks, as you will be given more slack in the kite.

On the other end of the spectrum, which is where the majority of FX users stand, is the freeride setting. What the freeride setting allows you to do is fly the kite a further forward back into the window, so you get that sheet-and go feel. Similar to what you get in the Switchblade, but not necessarily to that extent. You still have to fly the kite, and it remains a performance freeride kite, but it’s something that will increase the low end and grunt in the bar. Overall, it makes it an easier kite to fly.

Learn more about the FX!

Also included on the FX are the pure profile panels. What pure profile paneling means is that the panels on the kite go in the same direction as the kite’s natural arc. This increases efficiency and kite speed throughout the window, which results in faster returns to the Zenith during kite loops, and more low-end for more power.

Something to be mindful of on the FX is the trade in wind range for performance. The FX needs to be a flown more than some other kites. You can’t just park the kite, pull it sheet in on the bar, and sit back and get trucked upwind like you can on the Switchblade. You may have to cycle the kite through the window a few times in order to gain enough board speed before heading upwind. If you’re used to the power of a 12m Switchblade, and you’re looking for something with a similar low-end range, you may want to bump up to the 14m FX. On the top end of the FX, it’s got quite a bit of wiggle room. You can take it out in stronger winds than you can with the Switchblade. The FX is one of our favorite freestyle/freeride kites. Anyone looking for jumping, looping, unhooking, wakestyle or freestyle, the FX is your kite!

If you have any more questions, regarding the FX or anything else in the Cabrinha lineup for 2018, feel free to give us a shout. We’d love to help you. Thanks for watching, and we’ll talk to you soon. 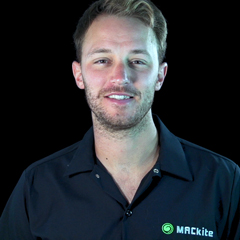 Nathan Patterson is a staple on the phones here at MACkite. He joined the team in 2012 and with him came a wealth of kiteboarding knowledge and experience. Since then, Nathan has been helping customers on the phone day in and day out. Most recently, he has led the charge here in electric bike and electric skateboard knowledge. If you have questions, Nathan probably has the answers and if he doesn't, you can bet he'll find find them.

Get to know Nathan: Shop Bio