Hydrofoils are being ridden for more than simply racing and are now accessible for most riders. For goodness sake, Kai Lenny is riding them without a tow on waves.

What was once a simple choice has now become a convoluted but potentially beneficial choice. Like eating at a cruise-ship buffet the right choice can leave you smiling and satisfied while the wrong one leads to a feeling of sickness and regret. With over 50 foil/ board combinations in our catalog this year there are more options than ever before, but which one is right for you?

Well, we have been in the foil game for a long time now and have tested and analyzed each choice to make it easy for you. Here is an in-depth look at the designs and benefits of the current kiteboard hydrofoil market. 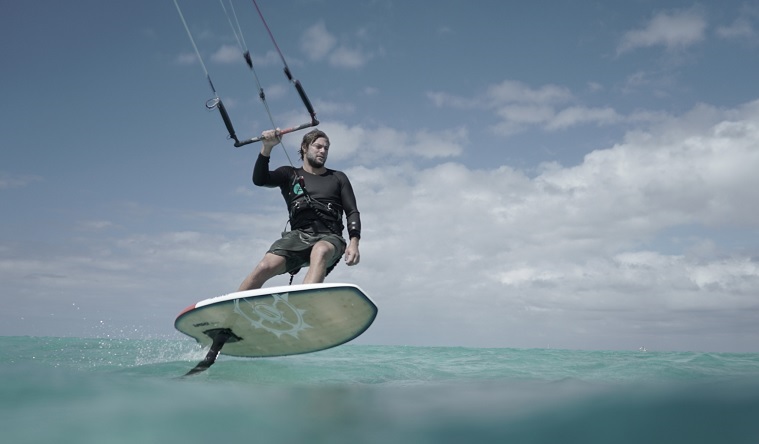 Hydrofoil design for kiteboarding has come a long way in a short period thanks to existing technology and research in markets such as boats, airplanes, and boardsport fins. What was a pipedream only years ago has now been refined to a point where learning to foil is easy and amazing accomplishments are being attained each year.

The first foils were made from repurposed air chair components, making foiling possible but unattainable for normal humans. The kite hydrofoils were designed for racing predominantly in small batches for custom order. This brought the tech further; however, being that they were designed for highly skilled racers were still fickle to ride and extraordinarily expensive. After these become more popular in kiteboarding circles, many brands started to make more accessible foil designs albeit still expensive being that they were being made in small batches out of expensive materials.

Liquid Force was the first major company to bring an affordable and beginner friendly hydrofoil system to the kiteboarding market with the Foil Fish. This at half the cost of its nearest competitor this board was a much-needed kick to the industry exposing hydro foiling as fun and accessible rather than a niche market for racing only. The extra weight of the aluminum and fiberglass foil was found to be acceptable and the extra durability made the system a long-term investment in fun.

Other brands such as Slingshot jumped on that idea for 2016 and now have developing programs for 2017 and the future. Board and foils have been largely standardized for compatibility and future adaptability and many systems can be fine-tuned for multiple styles of riding without excessive cost.

The first and most influential component of hydrofoil cost is the construction. Kiteboarding hydro-foils fall into one of two predominant construction methods; aluminum and carbon fiber.

Aluminum is generally the more affordable and durable option. Generally, aluminum foils are eight to twelve pounds heavier than a comparable carbon product.

In addition to being lighter, Carbon fiber foils have a more snappy and precise feel due to their enhanced feedback and dampening of unwanted vibrations. Again, as a generic statement, you can expect a carbon foil to be more comfortable and controlled at high speeds and during aggressive maneuvers.

Aluminum masts are typically coated in satin paint to enhance the look of the setup and work well as a coating at low speeds. Carbon foils are often brought to a gloss polish to help them smooth boundary layers at higher speeds. Plus it makes them look shiny and expensive like diamonds. ;)

If you want to get intense about it just check out the research done by crazy super rich sailors who win or lose races by tiny margins. In many cases, the coating on their hulls cost more than your whole quiver of kites and the car they ride in. I'll leave the research up to those guys and trust them.

The second important design aspect to take note of is the shape of the hydrofoil wings. Slim, wide wings or "high-aspect" wings such as the Slingshot Silencer have higher top speed, better high-speed maneuverability, slower planning, and are less stable at low speeds. 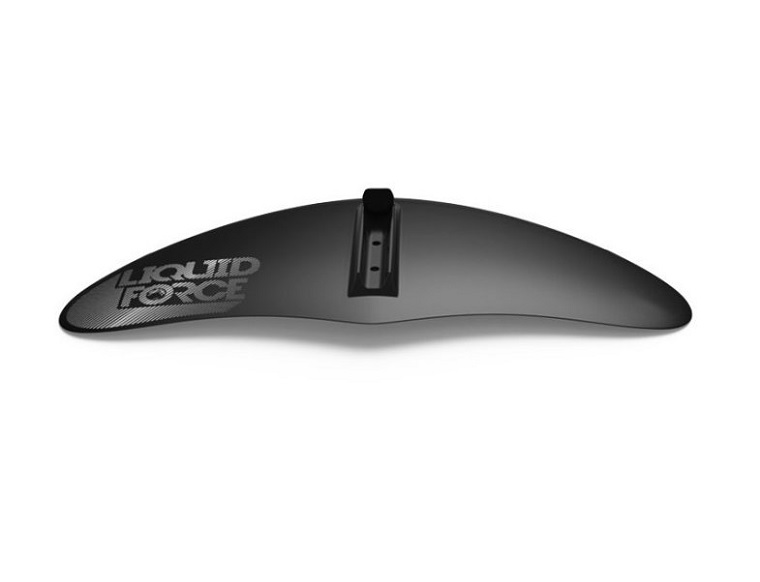 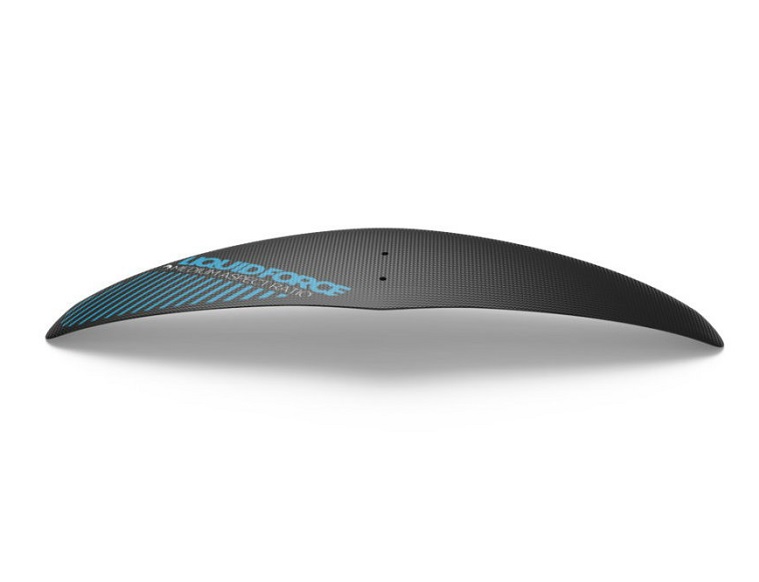 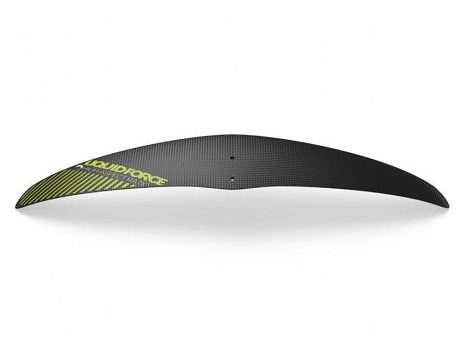 These benefits make the high aspect wings a popular choice of racers and experienced riders. Fat and narrow wings or "low-aspect" wings such as the Liquid Force Rocket Foil and Cabrinha Double Agent plane faster, are more stable at low speeds, lower top speed, and are challenging to control at high speeds. These benefits make them a popular choice for new foilers and those people looking to carve around and do tricks. Many of the designs for 2017 fall somewhere between these two extremes, making them accessible but also quick and efficient. These models would include foils such as the Slingshot Hoverglide, Liquid Force Happy, and Slingshot Ghost Whisper. We call those medium aspect wings and they are good for most riders from learning to recreational racing and everything between. The chart below will help you identify which products fall under each aspect classification. 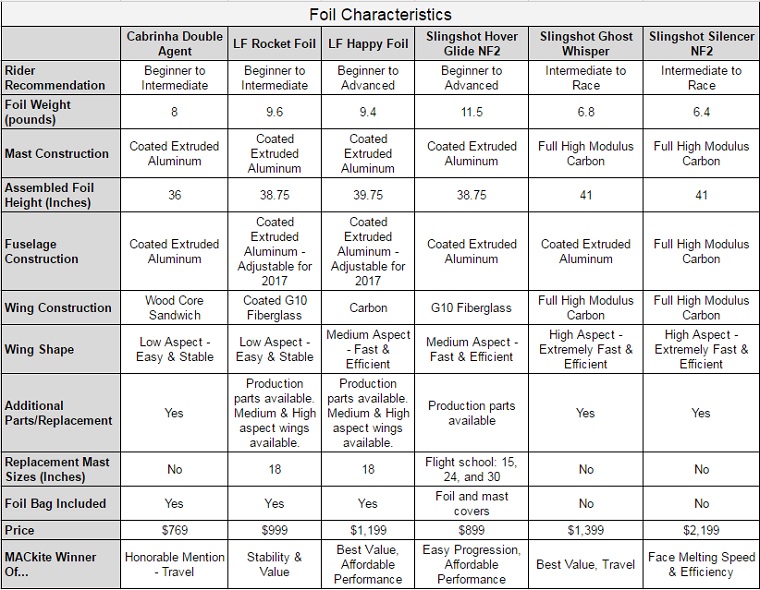 Similar to wings but not as influential are mast shapes.Masts designs do not get much attention but they do change the way a foil rides. Full-length masts are typically 36-42" tall and they allow the rider to easily stay on foil without touching the board to the water when traversing chop and waves. Shorter masts are also available and generally used for baby steps when learning and when riding in shallow water.

The often ignored dimension of the foil mast is the parasitic drag and foil curve. Like wings, the shape of the mast will have an effect on the quality of the ride and performance. However, for masts, the important dimensions are the width of the mast and the thickness of the mast. These measurements come together to give insight to the mast's parasitic drag.

Without getting too techy on that, let's just simplify it. Wide, narrow masts are faster, more efficient, and are more stable. Narrow, thin masts are more maneuverable but slower and less stable. Since much of the mast is out of the water during the ride, the mast dimensions do not have as much of an effect as wing designs; however, those riding at high speeds, performing tricks, or the lightest winds will find that the correct mast for each situation is quite beneficial.

Like masts, board choice is also critical for the correct hydro foiling mate. Hydrofoil boards are an afterthought for most people until they try a few back to back. The correct board for your riding style and skill will result in a more efficient, comfortable, and higher performing setup.

For light wind situations and learning, larger flat boards such as the Liquid Force Happy board with it's wide tail is easier to board start and keep riding during lulls or after a mistake. Conversely, narrower boards such as the Slingshot Hypermiler with small tail and chined (tilted) rails allow you to hold the foil in the water when riding with speed and power. (insert pics of light-wind riding and racing postures with big and small board).

Most boards fall in the middle of these two offering some benefit of both and include models such as the Slingshot Dwarfcraft, Alien Air, Liquid Force Rocket, and Cabrinha Double Agent. 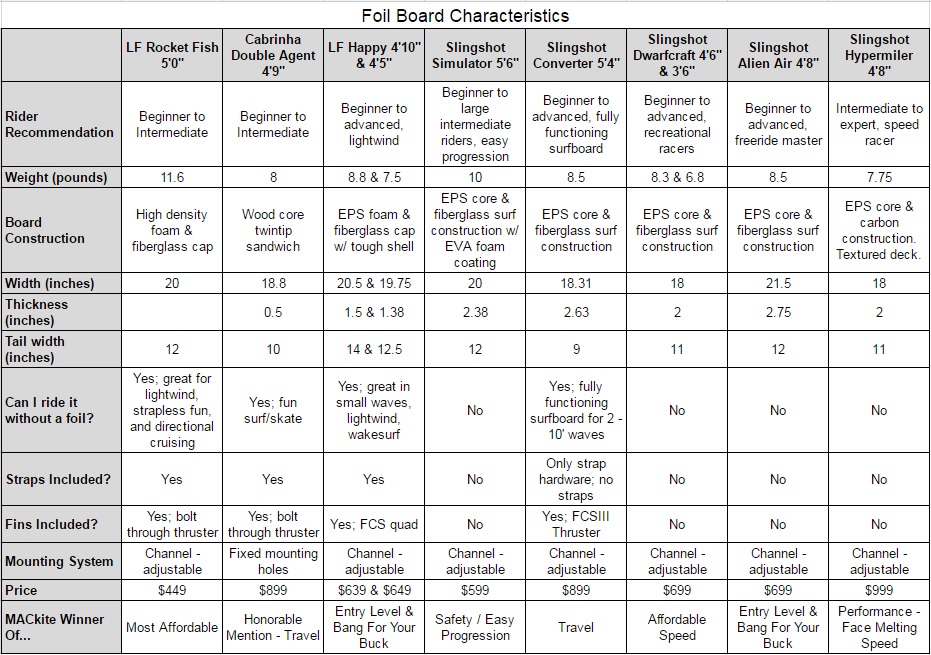 Twintip construction typically has a laminated wood core formed by a hydraulic press and are thinner than a half inch. This construction technique is durable and pliable making it perfect for twin tips. However, not ideal for the highest hydrofoil performance since it amplifies vibrations and warps under pressure rather than transferring energy into the hydrofoil for more crisp reaction and feedback.

Affordable freeride boards are more durable, heavier, and dampen vibrations more effectively while more expensive carbon fiber boards offer a weight reduction and a more precise feel. Think about the two like a Cadillac and a Ferrari. When racing at a neck breaking speed it is nice to feel in control and precise but hey for your everyday hood cruiser you probably want some comfort and ease of use so you don't walk funny after a long drive.

Track mounting systems that allow for fine adjustment of the position of the hydrofoil relative to the board are fast becoming an industry standard. This allows for adjustment to suit the rider preference and riding style as well as offers a more compatible product with other offerings and future products.

So where is foil board technology headed you ask? Tubercle speed foils, pliable wings, new materials, drones? Well, your guess is probably as good as ours but investing in a system that allows for updates cleanly and affordably is going to be a good call.

Buying a foil that is part of a comprehensive offering with support parts, upgrades, and future compatibility will ensure that you don't get Smart phone-d. That is, buying something that is nearly obsolete by the time it arrives. Heck, maybe by next year a small electric engine in an efficient foil will allow for riding in zero wind. One moment while I go patent that...