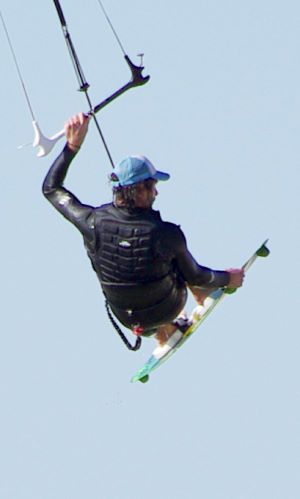 An oft-overlooked, but essential kiteboarding accessory is a floatation vest. Before you begin justifying to yourself why you don't need one - sure, you're a great swimmer, yeah sure, it doesn't look cool - whatever your excuse is, just think about the what if. Most of the time, you won't have any need for your floatation vest while kiteboarding. But when things do go sour, and they inevitably will, that vest becomes critically important.

When I first started kitesurfing, I'll admit I had no intention of wearing a floatation vest. And for the first year, I didn't. Eventually though, after much coercion from various family members, friends, and eventually Jeff, who admittedly wouldn't let me borrow shop kites unless I caved, I got a vest. After a fair amount of balking, I zipped the vest over my wetsuit and put on my harness. One immediate boon - the padding present in the vest helped prevent my harness from riding up, which historically has been an issue when layered over my slippery neoprene layer. Taking to the water, it was naturally only a matter of time until I came crashing down, and when I did, I was pleasantly surprised to find that the additional padding in the vest served as some impact protection. After another few hard falls, obviously dampened by the vest, I was starting to buy into this new protective layer.

Then, at the end of the Ferrysburg pier in Grand Haven, the wind vanished. My kite fell like a wounded seagull from the sky and lay sprawled before me. As it floundered through my relaunch attempts, I made the decision to self-rescue, already about 200 meters offshore and drifting further. Always an awful moment, my floatation vest gave me not only added buoyancy, but extra warmth for that cold, spring Lake Michigan water. After a long, exhausting swim in, I couldn't help but think how much the floatation vest actually helped, adding a sense of comfort to an always-tense situation. Needless to say, a floatation vest has since become a standard piece in my kiteboarding gear arsenal.

So, in review, a kiteboarding floatation vest manages to offer:

With the normal cost of a good floatation vest ranging between $92 to $149, you have no reason not to get one. You've invested a lot of money into your kiteboarding quiver - now take a moment to invest a little bit into yourself.