Progress Your Kiteboarding with an Intermediate Lesson

Why You Should Progress Your Kiteboarding with an Intermediate Lesson 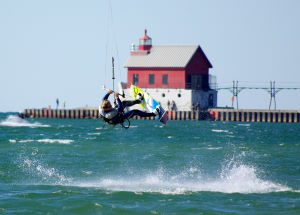 Kiteboarding lessons are all too frequently thought of as something a beginner does in order to learn how be safe on the water. Because of this, the majority of the kiteboarding populous learn to ride upwind, perform small jumps, maybe land a back roll, and then plateau. There is still a certain stigma that surrounds progressive tricks in kiteboarding - that is that many of those flashy intermediate (and even some advanced) moves are radically dangerous. In reality, many of them are largely accessible with the right approach. In all honesty, most of the potential for injuring oneself comes from attempts in an uncontrolled, high wind setting, or just through gutsy experimentation. While the latter works well for some individuals, there is no reason to forgo learning the tricks altogether just because you don't want to take those risks!

While much can be surmised from watching online videos and reading step-by-step instructions, the onus still falls on the rider to figure out how to properly execute the trick, and if they're having difficulties, diagnosing what exactly they are doing wrong. A lesson expedites this process by explaining the trick in a way that not only resonates with the rider, but also by further dissecting and focusing on the component parts of the particular move that may be posing difficulty. For example, when learning a front-roll, the problem may not be the rotation and kite placement, but rather the pop off of the water. This is a tough self-diagnosis and may take several more sessions to remedy through trial-and-error, with the time in between filled with hard crashes and discouragement. By working with an instructor however, they are much more likely to catch the problem and can refocus the lesson on learning to load and pop off of the water. This in turn not only makes the front roll suddenly manageable, but dramatically improves your current set of tricks, as well as opening the door for new ones!

Intermediate lessons are also a great way to stave off complacency, as well as identify and amend sloppy form. People will inherently gravitate towards different styles of kitesurfing, whether it be freeriding, freestyle, wakestyle, riding in the surf, or even racing. Within each of those disciplines, however, is massive room for development and betterment. Although progress is certainly more apparent in some concentrations when compared to others, a lesson focusing on how to jump with more control can be equally as useful and challenging as a lesson focusing on riding upwind more efficiently or learning how to jibe on a surfboard.

Kiteboarding is at a point where the equipment is no longer a limiting factor, but rather additive. Kitesurfing kites and kiteboards are uniquely designed to handle almost any challenge thrown at them (with the notable exception of landing on dune grass). And while gear will only keep getting more refined, the current level of safety makes now the perfect time to start to push yourself. You have likely invested thousands of dollars building your quiver - it only makes sense to spend a few hundred on yourself. Think back to what you first saw in kitesurfing that so fiercely grabbed ahold of your mind and began you on your kiteboarding journey. For me personally, it was watching a butter-smooth, altitudinous front-roll transition. I might not have known the proper terminology, or even much about the sport. What I did know though is that I wanted that to be me. I don't know if I've experienced a more magical feeling on the water than when I rode away from my own front-roll downloop transition nearly two years later. Give yourself the chance to experience that feeling. By taking a lesson, there's no reason you can't actualize that thing, whatever it was, that got you dreaming in the first place.