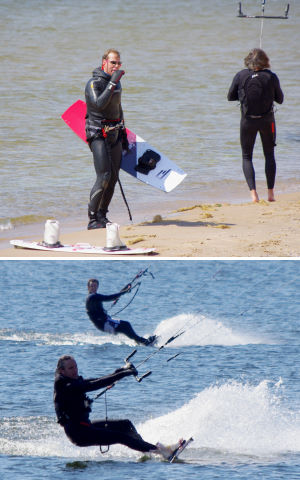 Kiteboarding is a derivative of wakeboarding. Yes, there's a dramatic difference between the pull, but wakeboarding has been and continues to be a strong influence to the kite side of things. I'm sure most of you have seen a board or two on the beach with a set of wakeboard bindings, or boots, mounted up. Although most riders prefer straps, curiosity is taking kiteboarders over to the dark side by the masses - and for good reason!

If you're capable of riding upwind and performing simple jumps and transitions - you're ready for boots! Yes, it adds a slight bit of difficulty to your launching/landing situation. Yes, it can be difficult in direct on-shore conditions with waves. Once you get past the learning curve, you'll be able to ride with more power and style than before.

Straps allow for much greater range of motion than boots, which creates a slight decrease of leverage on the board. They also can have the tendency to release when not desired, making for an interesting situation.

Personally, I come from a snowboarding and wakeboarding background - I find the locked feeling of boots while kiting to be much more comforting. Look at PKRA podiums for the past few years - you'll see that more and more of the world's top level talent tossing their straps in the trash in exchange for boots. Youri Zoon, Alex Pastor, and Alberto Rondina to name a few.

If you're interested in checking them out, here's a few things to keep in mind about boots: Make sure your board's inserts are properly reinforced. Check with us to be sure. Also, you should consider picking up a board that is more specific to wakestyle riding - something with a bit more surface and rocker would do the trick. Although it may seem large by the kiteboarding standard, the added length is nice for swing weight and plane-ability. The increased swing weight will slow down your rotations - something that looks much more appealing in the air, rather than the twitchy and fast movements that often come with riding straps. The larger surface area will help with the decreased upwind-ability due to the boots driving your heels down and the increased rocker line.

If you've got any questions, get in touch with Tucker. He thinks he knows a lot about boards.