How to Self-Land a Kitesurfing Kite

How to Self-Land a Leading-Edge Inflatable Kitesurfing Kite

Being able to safely self-land a kiteboarding kite is an imperative skill to have. While having a friend to catch your kite is always preferable, any kiteboarder looking to maximize their time on the water will inevitably have to learn how to self-land. Self-landing is a crucial proficiency, as in the event something goes wrong or the conditions suddenly flare, you need the autonomy to respond quickly and effectively to the situation. Fortunately, with modern kitesurfing kites, self-landing has become much easier to do with the incorporation of depower and safety release features. By practicing first in light and then medium winds, you can safely learn how to self-land your kite, even in the most unruly high wind conditions. 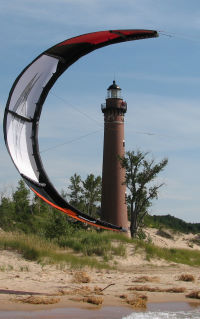 This first method is the one you are most likely to see veteran kitesurfers perform, as it works well with C-kites. Start with your kite at roughly 45 degrees in the sky and steer it toward the ground slightly. At this moment, grab and pull on both front lines at the same time, depowering the kite. As the kite begins to fall, grab the top front line and pull it toward you. This will bring the uppermost tip down into the ground. I would suggest practicing in lighter winds first, and then build up from there appropriately, as there is a bit of technique involved. It is a good method to land the kite in stronger winds once you are practiced with it.

Another good method is to use your safety line to flag out the kite, and then walk up it. Flagging a kitesurfing kite eliminates tension on all the lines but one, which causes the kite to lose much of its power. As the kite will naturally find the path of least resistance to the wind, it will either sit perched on the edge of the wind window or flip upside down, either way having just a fraction of the power. From there, you should unhook and walk carefully up the flagging line, not pulling but rather keeping a firm grasp on it, climbing up to kite. Once at the kite, grab hold of the leading edge to place it down. For all intents and purposes, on a five line kite, the fifth line will function as the flagging line. Even in extremely overpowered conditions, I've been able to safely land the North Rebel by setting the kite on its wingtip and aggressively pulling in on the fifth line, causing the kite to drift backwards and fall with its leading edge against the wind.

If you are using a Cabrinha kite, the IDS safety system makes self-landing much easier. The IDS functions as a quasi-fifth line. In light to medium winds, you can engage the IDS by releasing the QuickLink system with the kite several feet above the ground, causing the kite to land naturally out of the wind. If the kite fails to properly land and relaunches, unhook and walk up the safety line until you reach the kite, as explained above. Another method is to land the Cabrinha kite on its wingtip, grab the center lines, unhook, and walk up the kite. Once you reach the point where the lines split, grab the top line and pull it aggressively towards you, resulting in the kite falling on its leading edge out of the wind. 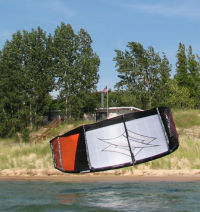 If none of the above methods work, you can always bring your kiteboarding kite about 30 degrees off of the ground and aggressively crash it in an effort to cause the leading edge to lay flat. However, this not only creates unnecessary wear on your kite, but also leaves the kite a tendency to spring off of the ground and relaunch, or roll across the wind window. If this happens, let go of the bar to eliminate the power and prevent yourself from accidently launching the kite directly downwind. People occasionally set their kite on its wingtip and place the chicken loop around a fixture (such as a stake, fence, bench, etc) to keep the kite in place as they run up and grab the leading edge. This can be dangerous if not done correctly, and frankly the above mentioned self-landing techniques are much easier than seeking out something to anchor your kite.

Remember that no matter which landing technique you employ, never wrap the lines around any part of your body, especially your fingers, since if the kite powers back up you are going to seriously hurt yourself or lose a digit. Also, when unhooking, always make sure your leash is properly secured, and don't be afraid to let go of the bar. Be sure to practice on light to medium wind days, where the ante is rather low if things go south. Remember, it is better to know how to self-land and never use it, rather than to have never practiced before and suddenly need to.