Differences in Stand Up Paddleboards

With roots in ancient Hawaiian tradition, stand up paddleboarding, or SUPing, has gained incredible traction over the past few years. Its appeal is almost universal, with different boards allowing for a wide range of uses, including surfing, flat water touring, yoga, racing, and exercise. Oftentimes, those new to SUPing will want to opt for an all-around board, which will function in a variety of conditions, allowing you to really experience the sport to its fullest potential! Still, with an almost oversaturated market, it can be difficult to pick the board that is best fitted to your SUPing aspirations. Because of that, it is important to understand the characteristics and accompanying advantages and disadvantages of different discipline-specific boards so you make the right choice! 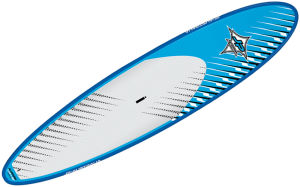 As touched on above, an all-around board is the appropriate fit for most of those new to SUPing. Generally, they are medium in length (ranging in size from 10'6" to 12') and width (generally near 30 to 32 inches wide). Very user-friendly, all-around SUPs are efficient at flat water cruising, yet have some slight rocker near the nose of the board to enhance performance in the chop and small waves. Because of this universality, families and beginners gravitate towards all-around stand up paddleboards, and tend to have a lot of fun! Our favorites are the BIC Wood Classic, JP Australia All-Around, and the Amundson All-Around. 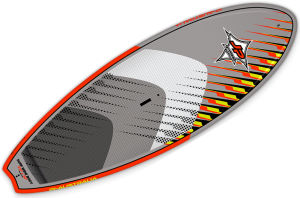 Stand up paddleboarding by its very nature is rooted in surfing. Because of this, it is not surprising that SUP boards designed for surf are in many respects very similar to actual surfboards. Surfing SUPs are smaller in size, generally in the 8' to 10' range. Sizing is going to be very dependent on rider weight and water salinity (salt water will allow greater buoyancy, and hence a slightly smaller board). The boards will also have greater rocker, designed to help drive and turn the board in the waves. The tail of the SUP will be narrower and may even have a different shape, such as a swallow or pin tail, to better turn the board as well. Fins are also an important consideration, and surf-specific SUPs will typically have stabilizer or thruster fins to give better edge control. One of my favorite surf SUPs is the JP Australia 9'8" wide body, which is short enough to perform exceedingly well in the waves, yet coupled with a width of 30" for enhanced stability. 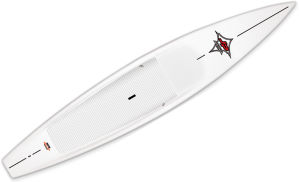 The majority of growth in the SUP industry as of late is in the discipline of racing. Racing boards are becoming increasingly efficient, many touting a displacement hull design. Displacement hulls are much more efficient than planing hulls, as they cut through the water rather than requiring the generation of lift to ride over it. To facilitate this, SUPs with displacement hulls tend to be much longer and narrower in order to reduce drag through more efficiently channeling water. Breakthroughs in design that are quite mimetic to sailing technology have allowed for the creation of super-efficient boards, and have subsequently generated a competitive race scene. Race boards are also ideal for exercise enthusiasts looking for long treks. The JP Australia Race Board was an instructor favorite this past year. 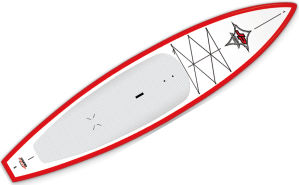 Touring SUPs are becoming ever more popular in flat water destinations. They tend to be high volume, which generates added float and reduces drag, allowing for long, efficient cruises. This high volume reduces the maneuverability of the touring SUP, but once up to speed requires much less effort from the paddler to sustain. Some have deck riggings or fixings for storage, perfect for lunches, fishing equipment, or even a few brews. Our most popular touring board was the JP Australia Cruiser, followed by the Amundson TR series.

The best way to decide what SUP is right for you is to come take part in our lesson program - we make sure to demo every board we sell! If that is an inconvenience, we are also happy to ship.