A Look at the Origins of Kitesurfing

A Look at the Origins of Kitesurfing

Kitesurfing, which is largely a derivative of windsurfing, is continuing to expand at a steady rate. Much of this growth is directly attributable to more recent advances in technology and safety features, making the sport far more user-friendly. Despite its recent popularity, the fundamentals of kite surfing, or kitesailing as it was originally termed, have been around for quite a while - in fact, they are traceable to 13th century China. During this time, kite sails were utilized for transportation purposes, added to canoes to increase the speed and stability of the vessel. This functional design remained relatively unchanged for about five centuries. 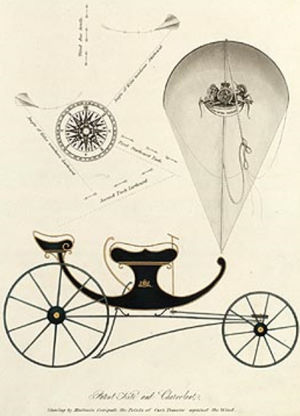 In the 1800s however, British inventor George Pocock began experimenting with pulling loads by harnessing kite power. Beginning with rocks, he gradually progressed to planks and then larger loads. In 1826, Pocock patented the "Charvolant" buggy. Employing two kites on a line that ran over 450 meters in length, the carts can be considered the progenitors of modern kite buggying.

The buggies could travel at near 20 miles per hour, reports indicating that the "Charvolants" passed a mail coach (the fastest passenger transport at the time) and even the Duke of Gloucester, a breach in etiquette that after required the buggy to stop and let the Duke pass by again. Later iterations saw the introduction of a four-line control bar for steering, combined with a T-bar for directing the carriage and sudden braking. Not surprisingly, the Charvolant was difficult to control, although it did effectively avoid tolls that at the time were leveraged against horse-drawn carriages. 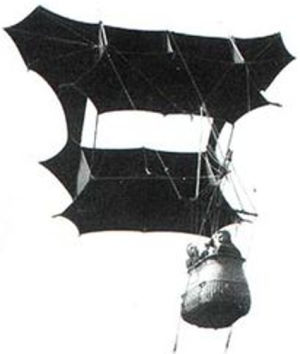 The utility of kites was further refined by Samuel Franklin Cody. Cody designed kites that could lift people, or "man-lifting kites"; the notion was adopted by the military as an alternative to balloons for artillery spotting during World War I.

In the 1970s, the development of Kevlar and then Spectra flying lines led to better kite control through increased efficiency and durability, the material being much lighter and less prone to stretching. In 1977, Netherlands inventor Gijsbertus Adrianus Panhuise received a patent for kitesurfing, defined as a water sport in which an individual is pulled by a kite or parachute-type device on a floating board, the first incarnation of a kite being used for what the sport is now. By the mid-1980s, inflatable kites were in the early stages of design, piloted by Bruno and Dominique Legaignoux, two brothers from the coast of France who would later develop Wipika.

Early forms of kiteboarding continued to evolve through the nineties, with Corey Roesler racing his kite ski contraption in the Gorge (designed in part by his father George Roesler, who was a Boeing aerodynamic engineer), and Laird Hamilton cruising in the waters of Maui. While beginning to garner some commercial interest, both were merely cruising downwind, making the sport unmarketable to the majority of people. Then, in 1998, Lou Wainman emerged out in Hawaii, managing not only to stay upwind but perform tricks that would take the kiteboarding industry years to come to fully adopt. While beginning as an extreme sport, kite surfing today has become quite safe, and only continues to grow more and more as barriers to entry continue to decrease.