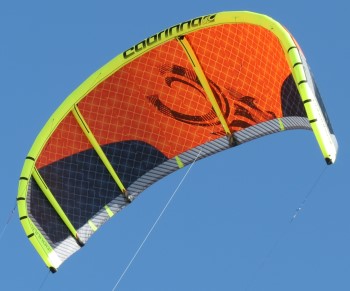 We get a lot of questions about comparing the 2013 North Rebel with the 2013 Cabrinha Switchblade, so here goes. The 2013 North Rebel is an amazing freeride / wave kite. I've even learned a few, basic unhooked tricks riding the Rebel, but that's not one of its strengths. The 2013 Cabrinha Switchblade however, was designed for wakestyle / freeride, so it's much better for unhooked riding. Pop, slack and make the pass all day long. Switchblade wins this category, hands down.

Both kites are great for all around freeriding, and both kites jump huge. Whether you like to just go out and "mow the lawn" for a while, or hit the trigger and launch, boosts, spins and smooth transitions - both kites will serve you well.

In the waves, I felt that both kites also performed really well, especially the newly designed 2013 Switchblade. They both rip upwind, allowing for much longer down-the-line wave riding, without taking forever to get back to where you started from. Turning speed is fast on both the Rebel and Switchblade, especially in the smaller sizes. Both kites will keep you right in the pocket in on-shore winds, and both will let you rip those immediate, toe-side transitions when timing is critical. Surf on, amigos!

Stability is another area where both of these kites do very well - rock solid for both. The 2013 North Rebel and 2013 Cabrinha Switchblade are both set-it-and-forget-it kind of kites. They're both easy to fly, and both kites would be just fine for a total beginner to learn with. 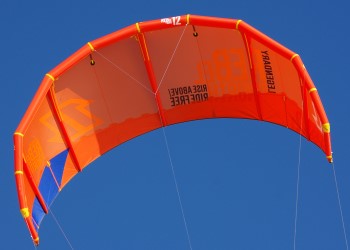 Both kites also seem to have great re-launch in sufficient winds, but the North Rebel, with the 5th line, allows for much easier light-wind re-launch. The only problem I've ever had with the 5th line is the occasional wrap around the canopy when I've crashed the kite. Usually, a couple of tugs will clear the line from around the canopy and you can easily relaunch. If the 5th line wraps the canopy in the waves, however - blow the safety immediately so it doesn't cut your kite in half. This doesn't happen very often, but needs to be stated.

I also feel extremely safe on either the North or the Cabrinha safety systems. The North Rebel flags out on its 5th line, while the Cabrinha flags out, using the IDS system, on both of its center lines. Both are easy to self-land, however I feel that the Cabrinha Switchblade sits on its wing-tip better and allows for easier self landing in gustier conditions.

If I had to compare these two kites to American muscle cars, I'd have to say that the Cabrinha Switchblade would be about a '71 Chevelle and the North Rebel would be a vintage Corvette. The 'Vette is low to the ground, fast as all get out and has some really sweet lines. The Chevelle is slam-shifting fast, looks like a beast, and rips the wheelies all day long! Bottom line: chicks dig em' both and so will you, my friend!