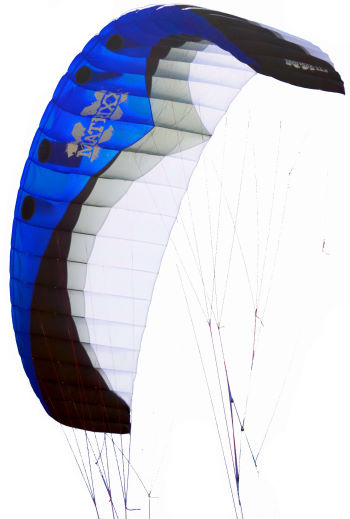 The wind was rocking at a steady 8-10 mph. I pulled the brand new HQ kites Matrixx kitesurfing kite out of the bag. I love the way that HQ Kites uses almost zero disposable packaging. Except for a little bit of bubble wrap around the chicken loop, there was nothing else to throw away.

I laid the kite out on the ground enjoying the idea of no pumping. This also makes the package super small. I think you could take a 9/12 quiver as a carry-on onto the plane. Stretched the fabric out onto beach sand and began to unwind the bar. The Matrixx is all set and ready to go - no lines to attach, no leading edge to inflate.

With the bar unwound, I gave the kite a few good pulls and in moments the kite was airborne. I think my total setup to launch was about 4 minutes. Very nice!

The kite flew very well straight out of the bag. No tuning, no tweaking. It was set and ready to go. I grabbed the Aggression Super Phatty kiteboard and jumped in. Much to my disappointment, the 12 meter Matrixx flew comparable to my 12 meter Switchblade in power. Generally, a foil will give you quite a bit more bottom end, but alas, not so here. I did get planed out going downwind , but went nowhere fast. But I will say that it was much happier in the light winds than my Switchblade or the North Rebel 12 that Jake had just taken for a swim. :-) No Hindenburgs for this kite.

The turning speed is really quite good - especially for a foil. The stability in light winds was fantastic. Again the power was similar to a 12 meter Switchblade (read: a 14-15 hybrid like the Liquid Force Havoc). I am super stoked to get the 15 out in 8-10 with either the Cabrinha Race Board or the Aggression Super Phatty again. I can't give a good judgment on the depower since the wind was so light, but it seemed comparable to most hybrids like the Naish Park that I have ridden.

Marc Hoeksema, our local kite junkie, (can you say 250 days of kiting in Michigan last year) pulled up and rode off with the new Matrixx in his kitemobile for a session with the Cabrinha Race Board. 5 hours later, after kiteboarding the pier heads in Muskegon, Marc pronounced it one of the most efficient setups he had ever ridden. Marc started with a Mosquito 7.5 (that would be a foil of death) back in 2000 along with his Liquid Force Pickle Fork.

I have to say that the Matrixx foil kiteboarding kite is at the head of its class in value and performance. If you need a kite for land, snow and water, the Matrixx fits the bill. It is also a kiteboard travelers' dream since there is no pump and no chance of bladder issues. Huge props to HQ kites for hitting on all cylinders on this kite.

Check out our current selection of HQ kites.