The Key to Kiteboarding Trick Progression

The Key to Kiteboarding Trick Progression

One of the reasons I have become so enamoured with the sport of kiteboarding is the ability to constantly progress, and, relatively speaking, the ease of doing so. Take wakeboarding for example. Sure, the board skills element is very much similar. However, throwing that front-roll comes at a much higher cost behind a boat than underneath a kite - due largely to the increased speed, you can really manage to hurt yourself. With kiteboarding, you can throw some pretty flashy tricks without the risk of serious injury. The

recovery time also tends to be far less - a usual botched attempt requires only a quick kite relaunch. Even with this accessibility, adding tricks to your kiteboarding repertoire can seem like a daunting task - and in reality, some are certainly going to be. But fortunately, a lot of your beginner and intermediate tricks are not that way, and this article is designed to help identify and remove those barriers that are holding you back from progressing while on the water.

1. Being comfortable with your kite

One of the most common problems people encounter when trying new things in kitesurfing is not being completely comfortable with their gear. With a few notable exceptions, kiteboarding kites have become very safe, possessing huge depower ranges and safety features to further eliminate power. But in order to benefit from these modern features, you have to know how to use and deploy them, and how to re-engage them as well. This means pull that QuickLink system, push the CPR system, identify the flagging line and engage it. Try it in low and high winds. Now safely reset it. Practice self-rescuing. Try to reverse launch your kite. Unhook your kite and let the bar go. Now get hooked back in and relaunch. Practice self-landing using the safety systems. Of course, do all this on a day when you have the beach largely to yourself, and ideally have someone there who can help coach you through it. Once you've gotten really comfortable with your kite, you'll find yourself attempting tricks with a whole new level of confidence.

The next step is thoroughly researching the trick you want to attempt. If you want to land that back-roll, watch instructional videos of it online. Make sure to watch several different videos, and when you find a particularly good one, view it a few times over, focusing on different parts of the trick each time. Focus on things such as rotation of the trick, what the rider is doing with their body, what they are doing with the bar, what they are doing with the kite, and the timing of it all. Next, visualize the trick in your head. Once you have done that, try the rotation on a trainer kite while staying in control of the kite to build the muscle memory. If you have access to kite surfers in your area who can do the trick, ask them to walk you through it. And then watch them on the water. This will all greatly contribute to your confidence and success those first few intimidating attempts.

Now that you've made a mental commitment to the trick, it is time to pick the right conditions. Going into the trick slightly underpowered is advisable as, if something goes wrong, the consequences are much less dire.

I can remember the first time I tried a front-roll in much too powerful conditions - I inadvertently looped the kite halfway through the rotation and found myself thrown like a ragdoll through the air. Not only was it painful, but it destroyed my confidence for sessions to come. You do want to have some juice in your kite though, or you're going to find yourself unable to get enough power to actually complete the trick, and that's not good for confidence either. When I'm working on something new, I generally look for consistent wind conditions where I can ride comfortably upwind. I also try to make my attempts near the shore or in shallower conditions where I can still touch, in the event the kite crashes. Making sure I have peace of mind going into the trick allows me to give my undivided attention to actually executing it. 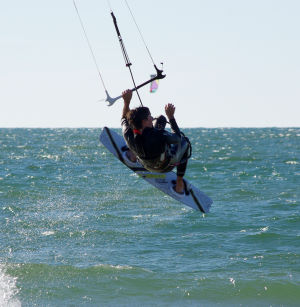 Tricks so often go awry for people because of a lack of commitment. If you're going for that back-roll nuke grab, fully commit yourself to the trick, both mentally and physically. At this point you should understand the fundamentals of the trick, and have thought through the process mentally a few times. Now is the time to go for it. Channel all that frenetic passion and commit to landing the trick. You need to have the end in mind from the very beginning. And sure, you probably won't land it the first time. Or even the second. But give it at least five good attempts on the water. Make the effort at the start of your session, when you still have all the excitement and energy, and you'll be surprised just how quickly you start to progress.

Most importantly, have fun and be safe. It is important to push yourself, but know your limits. Sometimes a larger trick requires the mastery of smaller skills first, that'll come together for that synergistic front-roll kiteloop. And then again, there are tricks you'll never get around to. I, for example, will never attempt a mega-loop. But there is still a lot I can do, and almost endless variations on fundamental tricks to keep me constantly chasing that next skill. So pick your starting point and get out there - we'll see you in the PKRA.

Authored by Jake Mitchell, a 23 year old intermediate kiteboarder who is a strong advocate for pairing a kiteloop with any trick.