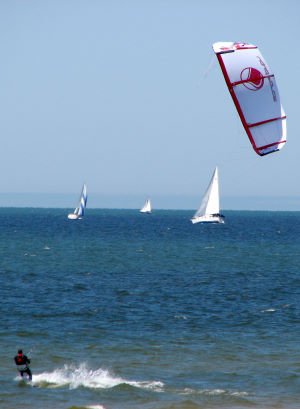 In both sailing and kiteboarding, it is possible to make progress upwind. Both require a finesse of the sail as well as careful edging into the wind. To do so is an acquired skill. Sailors will be familiar with the concept of taking a few tacks to achieve any significant distance.

Similar to moving upwind, it is also possible to over-sheet the sail and misuse the potential power. In kiteboarding, over-sheeting may cause the kite to backstall or lose power, while in sailing over-sheeting can actually cause you to move backward. Over-sheeting in both instances is because you have pulled in too much sail and have changed the angle to a position opposite the direction of travel.

Sailors gain a weighty advantage when it comes to wind knowledge in kiteboarding. The concept of wind direction, quality, and ride-ability will seem familiar to even the most novice sailor. For instance, when you say side-shore winds or a north west at 20 knots, a sailor will be familiar with this terminology.

Sailors have a distinct advantage in learning kiteboarding and are among the best candidates for new riders.