The south wind kiteboarding Mecca of Lake Michigan kitesurfers. Little Point Sable is quite famous around the Great Lakes kiteboarding scene for its epic southerly blow. Of course, the crystal clear water and amazing beaches make for a great day whether there is wind or not.

The Point, as it is known, has 2 magical ingredients that allow it to crank up the Beaufort scale in wind velocity. First is the huge pile of sand just northeast of the main riding area - also known as Silver Lake Sand Dunes. The sand dunes heat up and generate an incredible thermal effect pulling the wind up the coast and inland with tremendous power. The second part of the recipe is the pinch point in Lake Michigan. If a wind is pushing south in the South Haven or Grand Haven area at 5 knots, it keeps filling in until it hits Little Point Sable where it is pinched off at a narrow spot on the lake. Here it becomes like a hose when you put your thumb over the top and it squirts water much faster than the trickle it was coming out at. If it is blowing directly south or SSW at the bottom of Lake Michigan on a hot summer day, you can bet the Point will be going off with wind and kiteboarders. A word of caution - too much west and the magic won't work. If it is just plain windy you will be fine, but a light wind only works with South or SSW or sometimes a SW wind.

Where to ride? Please walk about 1000 yards to the south of the lighthouse. Little Point Sable is a famous landmark that has many tourists and sunbathers. The beach is not quite as wide down on the southern end, but rigging up down there makes it much safer for those beachgoers to the north of where you are riding. We recommend that you bring 2 kiteboarding kites to the beach with you since it is a decent hike to your car and back. Don't forget your small kite - 5 knots in Chicago can be 25 knots at the Point. When you are riding, make sure to not get more than a few hundred yards north of the lighthouse if you are getting blown downwind (this would be to your north). The beach will begin to drop away quickly once past the lighthouse. A very long and lonely swim if you lose your wind.

Kite-surfing at the Point is generally not so hot. The sand bar pushes a long way out into Lake Michigan, so this is not known to be the epic kitesurfing area.

About Silver Lake and Little Sable

Silver Lake sand dunes are famous for their massive size and the fact that they allow off-road vehicles on the dunes. If there is no wind, go rent a jeep for a crazy day riding the dunes. Parrot's Landing can hook you up.

Directions to the kiteboarding beach:

Plug 287 North Lighthouse Drive, Mears, MI 49436 into your GPS. You will need to pay to park in the parking lot. Bring food and water with you since it is 20 minutes back to the nearest store.

Silver Lake is located next to one of the best water season spots, Little Point Sable. The dunes west of the lake and the location on the point make for a snowkiting spot that has more wind than many areas more inland. The lake works well on N, NW, W, and SW wind. Because of the consistent wind, the lake does not accumulate as much snow and may be better suited for skis rather than a board.

Access is on the east side of the lake in the state park. Parking space is plentiful. The gas station in the town of Silver Lake is about the only business open in winter. The dunes provide an interesting backdrop.

Special thanks to Julian Kuz for the writeup on this snowkiting location! 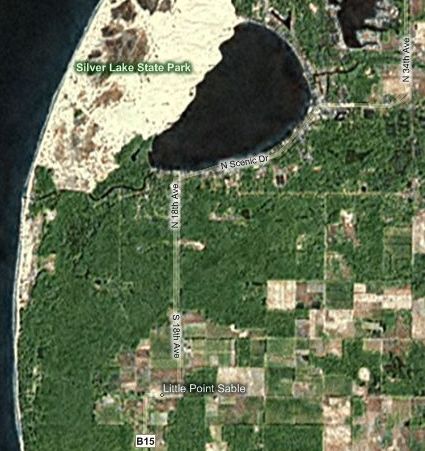