Jumping...arguably one of the most exciting aspects of kiteboarding. It's truly amazing to see a rider flick themselves 20-30 feet or more up into the sky, fly through the air, then glide smoothly back to the water again and ride on. Whether spectator or rider, jumps are just plain cool!

The purpose of this article will be to lay out the basics of jumping with a bow kite. Mainly for the newer riders who are ready to start getting some air, or who want to progress past the "huck-it-and-hope-for-the-best" technique that many of us started with.

The elements of successfully jumping bow kites are really quite simple...board speed, line load, send kite, and release/pop off water (details in a moment). That's all it takes to get you in the air. Once you're flying high, keep your kite overhead, and as you approach the water again, pull your lead hand to get the kite moving forward again for a smooth and powered landing. The simplicity of this used to drive me crazy. There had to be something more to it than that. I knew the steps but couldn't get anywhere close to the heights of many of our local high flyers. Well, here's the catch... even though the steps are simple and few, it all comes down to proper timing, finesse, and feel. The only way to develop the correct muscle memory for consistent smooth and stylish jumps is to practice, practice, and practice some more.

Let's take a closer look at each step:

1. Gather board speed: Depending on wind conditions, sometimes it's necessary to veer off the wind slightly (go downwind) to make sure you have adequate board speed.

2 & 3. Load your lines and send the kite: These steps are combined because they happen simultaneously.     Load your lines: Build tension in your lines by edging hard (lean back, steer your board into the wind). 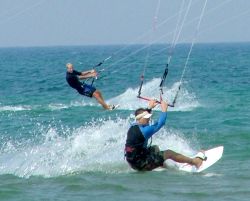 This step requires quite a bit of "feel" and finesse. If you don't edge hard enough, you won't build enough line tension for a big jump. Edge too hard or too long and you will scrub off too much speed, limiting your ability to go big as well.
Send the kite: Steer the kite to 12 o'clock position. This step occurs while you are loading your lines. I know this sounds easy, but I confess I struggled (and still struggle at times) to get this right. If you steer the kite up too slowly, it will be difficult to hold a solid edge for good line load (too much lift before you're ready for take-off). My bigger struggle, however, was being too aggressive with sending the kite. I would (and occasionally still do) send the kite too far past 12 o'clock (behind me). It's good for a strong yank off the water, but not good for height or landings. Without the kite overhead, you won't get the maximum lift and will drop out of the sky like a rock. This step may require some "retraining" for our fellow "C" kite flyers who are used to sending the kite past 12 o'clock for proper jumping.

4. Release/pop: Now that your lines are loaded and your kite is approaching 12 o'clock...it's time for the "release/pop". This section is difficult to describe or verbalize, but it's critical for big jumps. A split second before your jump, you "release" the edge and "pop" the bar to your waist for full power. The "release", "flick", or whatever you want to call it, is basically a split second move where you attempt to throw your weight and board away from the kite. If you watch the experts very closely, you'll pick up on this subtle, but critical step. Personally, I find it helpful to give a split second "push" on my rear foot/heel, then twist and flick my hips up and away from the kite. Be careful not to hop, jump or anything like that; doing so will likely release the line load prematurely.

5. Keep kite overhead (12 o'clock position): Keep the kite above you while in the air... this is your "parachute" and doesn't provide soft landings when it's beside or behind you. 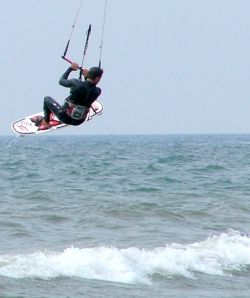 6. Spot landing and pull on lead (front) hand: Spot your landing so you are ready for touch down. Just before you return to the water, pull with your lead hand (direction you are traveling) which will dive the kite and give you a smooth and powered landing (think landing ramp -vs- landing flat). It may not be a bad idea to initially err on side of keeping the kite above you too long. Doing so will give you a relatively soft landing, but without the forward momentum you will likely sink down into the water. Pulling too hard or too soon could result in a kite loop and/or a very powered landing.

- Make sure you have plenty of clear and open downwind space. Be aware of obstacles, other riders, etc.

- Start small and focus on safety and technique. Part of that means being smart about which days to practice your jumps. Going out overpowered and shooting for the moon before you have a good feel for controlling the kite in the air and knowing how to land will be painful (trust me). Height will eventually come... it's better to be comfortable and smooth before working on height.

- Watch the experience riders jump. Watch and learn from their body movements and what they do with the kite. 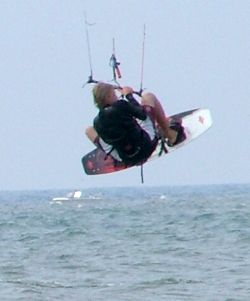 - Keep hands towards center of bar to prevent oversteering/overflying the kite.

- When in the air, tuck your knees to your chest. It prevents the "dangling leg syndrome" (and makes your jumps look bigger).

- As your jumps get higher and your landings more powered, you will need to land with your board pointing more down wind. This will help prevent butt-checking/skipping upon landing.

- If the wind is fluky or weak, don't go for the big air. Consider other tricks in your bag.

- You may want to consider wearing an impact vest.

- If you start to spin in the air (intentionally or unintentionally), remember to pull on your lead hand (direction traveling prior to jump) just before landing. 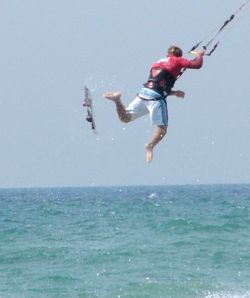 - If one of your feet comes out of your foot straps, kick your board away as soon as possible. Never try to land with one foot in and one foot out of the straps.

- Don't be afraid to ask questions for advice from the local experienced riders. We are very fortunate to have an abundance of great riders who are eager to share their knowledge and help you get to the next level in your riding.

Have fun and be safe! 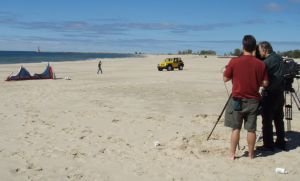 A few weeks ago, Kyle Krawiec of Detroit Kiteboarding gave me a call asking about good places to kite in the Saugatuck area. Kyle had been contacted about doing a commercial for Jeep, and he said they needed a handful of kiters and a good place to shoot. We decided that Little Sable Point would offer the best winds and backdrop for the commercial. 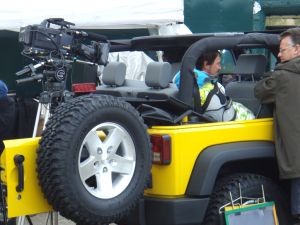 A week later we were in Muskegon filming the commercial; somehow Steve had convinced the set manager that Muskegon was the best place to shoot. It was a clear blue sunny day with mostly no wind. They fed us lunch, and then we started setting up kites and getting the Jeeps ready. It was quite the production with a 15-person crew, kite gear, and a lot of camera gear. Kyle and Jeff DeVries had the privilege of driving the Jeeps around on the beach. We filmed several different takes of the cars driving down the beach and then some takes of us pretending to set up kite gear. 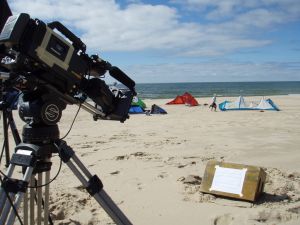 The wind started building out of the north at about 10-12 knots. So we went out on the water and tried to kite. To kiters it would have looked pathetic, to the average Joe - kiteboarding? There were a few gusts that came in and we were able to stay upwind and do some little jumps. Canadian Dan Cote caught a gust and sent a nice kite loop for the camera. Then the wind was pretty much done. We filmed a few more shots of the Jeeps driving around and then called it a day. 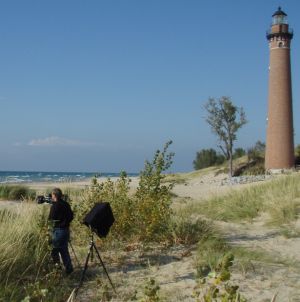 The next day we all met up at Little Sable (say-bull not sah-bull) Point. This day was windy and overcast. The crew was setting up for a shot in front of the lighthouse when it started to rain. It rained on and off for about 2 hours. Dan, Jeff, and I made the best of this time by pumping up our 12m's and ripping around in 20 knot WSW winds. We had a blast; there were some messy waves coming in and we were throwing down. Dan was going for it- he kept trying crazy stuff, and the next thing you know he blew out his knee doing a kite loop. He body dragged into the beach, someone caught his kite, and I rode over to see what was up because I saw him on the ground - he had the look of pain in his eyes. They rushed him to the hospital and brought him upstairs. Turns out it was a sprain and he should be back on the horse before too long. 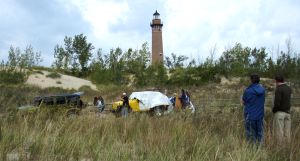 Around 1 p.m. we took a break for lunch; the skies were clearing and the wind was still holding. We continued where we had left off earlier, filming in front of the lighthouse. We did a bunch of takes of us getting out of the car and walking to the beach. Jeff must have opened and shut the tail gate on that Jeep a hundred times. We then went down to the beach to film some kiting action. They filmed us setting up and launching the kites. As soon as it was time to film the kiting out on the water - the wind dropped off to about 10-12 knots. We still tried to make it work and they filmed a few more shots. 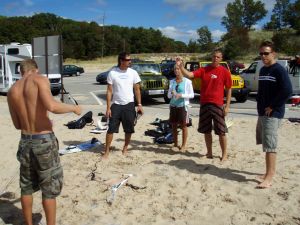 It was now dinner time, so we called it a day. The crew said they had enough footage to piece together the commercial. In a way, I felt like we had let the kiteboarding community down by not making the sport look gnarly. Then it came to me- I got paid for hanging out at the beach for two days with my friends; you can't beat that.

The commercial was made specifically for the Detroit Auto Show. As I understand it, there will be a panoramic wrap-around screen at the Jeep display. When you walk up to the Jeeps, you will feel like you are in West Michigan with kiters around you. If this is any indication where kiteboarding is going, get ready for a bunch of new riding buddies at the beach next summer.

Back to Kiteboarding Articles