One of the inextricable requirements of kitesurfing is wind. The sport creates droves of self-styled meteorologists who fervently follow the forecasts and weather patterns in hopes of accurately plotting their next session. While there are certain indicators, such as fronts and low pressure systems, and warm, sunny days that generate thermals (sea breezes), the wind is still largely unpredictable. One of the first important things to accept when entering kiteboarding is the spontaneity of the wind. You are without a doubt going to find yourself sitting on the beach in spite of the breezy forecasts that were projected, and equally so are sure to score sessions that seemingly came out of nowhere. This same irregularity also carries over into the actual wind speeds found when you arrive at the beach. Often, people purchase wind gauges to aid in this determination. With the fallibility of the equipment aside, wind meters can be inaccurate due to the concept of gradient wind. Basically, the wind tends to be stronger higher from the ground due to reduced friction and resistance that is encountered at a surface level. As it can be difficult to get a wind gauge 20 meters off the ground, the wind meter reading will likely be skewed. Fortunately, by learning how to read the surrounding environment, you can ascertain the wind velocity through the Beaufort scale.

The Beaufort scale was devised by Sir Francis Beaufort, an Irish Royal Navy officer, in 1805. It was the culmination of many long and complex works that came before it, creating a standardized scale that removed much of the subjectivity of evaluating the wind. The Beaufort wind force scale has been tweaked only slightly since its original positioning by Beaufort, and several higher categories were added to better account for hurricane winds. Still, despite the advances in technology, the scale has remained largely static. 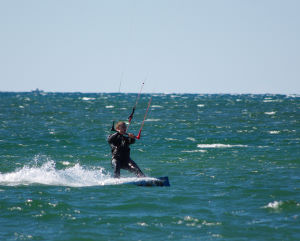 Included above, the scale is highly pertinent to kite surfers in the number ranges of 1 to 7, which comprises wind speeds from 0 to 33 knots. Each level is possessive of different indicators - for example, scattered whitecaps begin around 7 to 10 knots, and increase significantly between 11 and 16 knots. These signs can then be compared against land indicators, such as flags, tree branch movement, and moving debris. Eventually, this analysis will almost become second nature to you. On numerous occasions I've used webcams to diagnose the wind speed by focusing on a few key elements, especially when the larger wind meters seem to be inaccurate or broken.

If a wind meter still seems preferable, don't be assuaged into not purchasing one. While there a many technical devices on the market, we recommend simplified versions, as they are generally accurate enough to help you select the proper kite size, and won't spoil your day if lost, forgotten, or ruined. Just know, you don't need a wind gauge to kite safely, but rather a few minutes of study into the Beaufort scale.

Jake Mitchell
Years Kiteboarding - 3
Personal Use of Wind Gauge - No