How Does Sheeting a Kitesurfing Kite Work?

How Does Sheeting a Kitesurfing Kite Work? 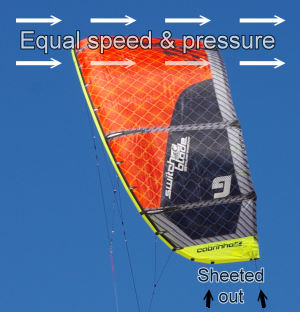 Put simply, sheeting is changing the angle of your kitesurfing kite relative to the wind. When you move the control bar closer and farther away from yourself, you are sheeting the kite. Pulling the bar towards you, or sheeting in, changes the angle of the kite so it has greater interaction with the wind. Vice-versa, sheeting out, or pushing the bar away from you, flattens the angle of the kite, in turn reducing the power. This back-and-forth adjustment is how you essentially control the power in the kite, an almost constant balancing act.

Sheeting works by adjusting the line lengths attached to the kite. By changing the angle of the kite, more or less lift is generated, explained through the Bernoulli principle. The profile of a kite serves as a wing, with air flowing both underneath and overtop. When the kite is horizontal with the wind, or the bar is sheeted all the way out, very little lift is generated, the air flowing around the kite being at a relative equilibrium (moving at the same speed and distance). As you begin to sheet in and create an angle with the kite, the air travels over top of the kite at a greater speed, and the air flowing underneath the kite slows. As the Bernoulli principle holds, the speed of the fluid (which air is) is inversely proportional to the interacting pressures. As the air is flowing slower beneath the kite, there is a greater pressure than the air flowing over the top difference; this difference in pressure hence results in lift. If you oversheet the kite however, generally indicated by the wingtips tucking in, the angle of the kite is too pronounced, preventing the air from fluidly flowing over the top of the kite. This is referred to as turbulence, and consequently creates no lift. 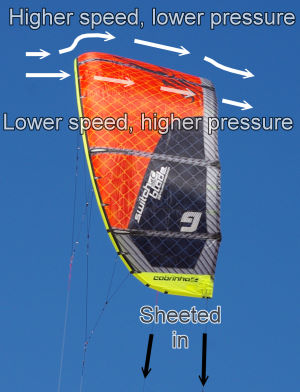 The other factor at work in creating kite power is deflection. As the wind contacts the kitesurfing kite's surface, two things happen. First, the kite slows the wind down and pushes it downwards along the bottom profile of the kite. Due to Newton's laws, the kite gets pushed up and away as a result of the deflection. The kite flies forward, but does not move backwards as it is attached to the lines, which are in turn connected to your harness. Instead of drifting backwards, the kite pulls on you, generating power just as the lift did. Deflection will play a larger role in generating power when moved aggressively through the wind window, such as when diving the kite. Lift has more influence when the kite is higher in the sky. Both factors are still essential however in generating the necessary power. It also should be noted that when the wind increases, lift and deflection increase in a more exponential than linear fashion. If the wind speed increases by double, the power of the kite increases four-fold, hence why a larger distinction exists between smaller kites than their larger counterparts. You'll see a much bigger difference between a 7 and 9 meter than a 12 and 14 meter.

To get back to sheeting, when a kite is sheeted out, the back lines are let out, which allows the trailing edge of the kite to flatten out. This reduces both the lift and angle of deflection, and consequently the power. During the very opposite, or pulling the bar in, brings the trailing edge down, thus generating more power. On many modern kites, the bar can be sheeted out to the point where the wind flowing around the kite moves at the same speed and distance, hence eliminating basically all of the power.