Deciding Between a Waist or Seat Harness

Deciding Between a Waist or Seat Harness

One of the more frequent questions we get from new kiteboarders is whether they should get a waist or a seat harness. Despite a few notable exceptions, that answer is going to boil down to preference. While it is a decision best made in a kiteboarding shop where the different styles can be tried, not everybody has that option. For that reason, I'll compare the major differences. 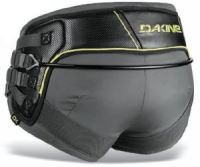 Seat harnesses are generally quite popular with people just learning to kitesurf. They tend to fit around the hips, with leg straps similar to those found on a climbing harness. Because seat harnesses sit lower, they have a lower tow point, or spreader bar location. This lends itself to greater stability, which in turn allows for easier water starts. Seat harnesses are ideal for people with back sensitivities or problems due to the lower pull point, and heavier set riders. Disadvantages include that the fact that they tend to be bulkier, and can constrict one's range of movement. They also are more apt to be compared to large diapers, so the wearer should be comfortable in their self-image.

Waist harnesses are often most popular with riders who gravitate towards freestyle riding or kite surfing in waves. Waist harness will fit around the abdomen, much like a WWE Championship Belt, allowing for full leg movement and greater torso maneuverability. This same fact allows the wearer more comfort when walking around on the beach during setup, prolonged swims stemming from self-rescues, and proves easy to put on and take off. Major disadvantages include that they tend to ride up, especially for people who keep the kite overhead when learning, can cause rash and chafing, and can lead to back discomfort, as the pull will be concentrated higher on the back. 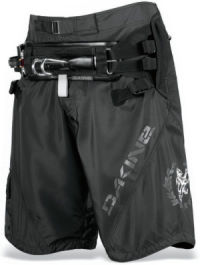 A third type of harness has recently been gaining popularly, colloquially termed a boardshorts harness. The boardshorts harness tends to be a combination of the seat and waist harness, offering a lower tow point as well as lower body flexibility. For all intents and purposes, they can be thought of as a climbing harness disguised under board shorts. This results in a lesser amount of support, but serves as a good compromise for those not keen on the other two more popular options.