If your first question to this title is "what are foil kites?" you have a few things to learn... here are the basics.

Two types of Kites used for Kiteboarding or Snowkiting

There are essentially 2 different types of kiteboarding/snowkiting kites; foils and inflatables. 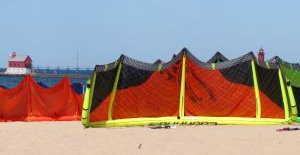 Inflatables are what most people have learned to kiteboard with in the water. They are easier to relaunch, and now-a-days have a ton of depower. You know you are looking at an inflatable kite if it has a rigid structure that is created from a leading edge and struts. This is often noticeable on the beach because the kiteboarding kite will actually hold its shape and the struts will point into the air while it is resting on the beach. Like I said, most kites sold in the industry that are used on the water are inflatable kites, with the exception of notable brands like Ozone Kites, HQ Power kites and Fly-Surfer Kites, who all produce the 2nd style kite, the power foil. 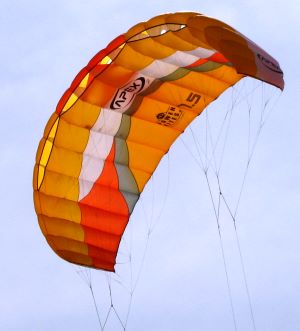 A foil kite is most noticeably different from an inflatable kite with the lack of any actual hard structure that holds the shape of the kite. A foil kite keeps its shape with a series of cloth ribs that hold a top canopy to a lower canopy, along with a very complicated series of strings called a bridle (NOT "bridal") that work together to hold the canopies flat when the kite is filled with air, just like a parachute. The foil kite has been around way longer than its counterpart the inflatable. Knowing this, you may say, "Heck, I am going to buy all new foils to kiteboard with since the technology has been developed over a longer period of time, so it has to be better." Well, hold on and keep reading- there are pros and cons to why foil kites are not usually the best kite for use on the water. A lot of that has to do with the differences of a closed cell vs. an open cell design, a difference that can mean life or death. Foil kites also have a tendency to last 2-3 times as long as an inflatable if cared for correctly. This is mostly based on the fact that you are not pressurizing the kite to hold a structure every time you use it, like you do with an inflatable.

Now to the meat and potatoes of this article. Now that you have a basic understanding of the differences between an inflatable kite and a foil kite, let's get down to why you need to know the differences between power foil kite designs. Today we are going to talk about the difference between a closed cell and open cell canopy and when you should choose to use them. I know that most of you are not made of money, and that is why picking the right power foil kite to add to your quiver is important. Ok then, let's get to it.

Open cell and closed cell kites have a lot of the same design characteristics. They both utilize a complex bridle system to hold the kite flat against the power of the wind. This bridle is what makes a power foil kite so efficient. The whole kite can face the wind, in some cases making foil kite appear to be a lot stronger for the same size inflatable kite. A 10m foil can often have the same power as a 13-15m inflatable. Yeah, no kidding, so when you order a foil kite, be sure to talk to your MACkite sales associate to get the right size kite for you. 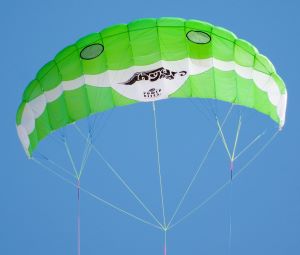 Not only do they share a bridle system, but they also have a similar internal structure created with the cloth battens that hold the top canopy to the lower canopy. This gives the kite the ability to inflate, and the wind actually plays a huge role in keeping the shape of the kite. Gusty and light wind can be a foil kite's worst enemy. So what is the difference between an open and closed cell foil? It is whether or not the leading edge of the kite is open so you can see the individual cells of the kite. A closed cell foil has the front of the kite closed off and has a series of baffle ports that allow air into the kite, but when the kite is leading edge down in the water or on the snow, those baffle ports are closed off on the inside of the kite with flaps of fabric. A really simple solution that allows for a foil kite to be relaunched off of the water.

Yup, a completely soft kite with no sealed parts that can be relaunched off of the water without it filling up with water and becoming a huge drift anchor. That, my friend, is the single most important difference between an open or closed cell foil that will allow you to use a power foil kite on the water. A closed cell power foil kite can be used for snow kiting and kiteboarding without blinking an eye. MACkite stocks the Matrixx and the Hydra Trainer by HQ Power Kites. The Matrixx a full-on sheetable kite that is used with a harness to control its power, and the Hydra is a trainer kite. 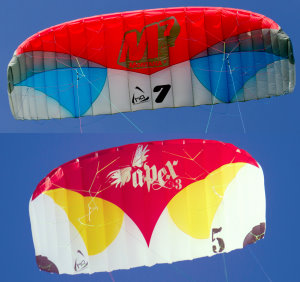 Closed cell foils are affected less by gusts in the wind. Since the leading edge of the power kite is closed off, the baffles minimize the amount of air that is forced into and out of the kite when the gust hits the foil. An open cell power kite does not have that nice little feature, and as a gust hits the kite, it can over inflate the kite, and as the excess pressure from the gust dissipates, the open cell foil can actually collapse on itself for a very brief moment. This is why I am personally not a big fan of open cell foils; in gusty conditions, the kite becomes unpredictable. That unpredictability is increased when you get a kite with a high aspect ratio, meaning a wider (wingtip to wingtip) and shorter (leading edge to trailing edge) kite. Basically, the fatter the kite appears to be in the sky, the less it will be impacted by the gusts and the more stable it will be.

Just to give you a comparison with actual open cell kites, the Ozone Frenzy or the HQ Montana are higher aspect siblings to their counterparts the Ozone Access and HQ Apex. The Frenzy and Montana will jump higher and turn faster, but the HQ Apex and Ozone Access will be more stable. All four of these open cell foil power kites are great kites to be used as a dedicated snowkiting kite. They should never be used on the water since they are not baffled and will take on water and sink almost instantly when they land in the water.

Another key difference is that an open cell foil will fly a little better in lighter wind at first. As a closed cell foil inflates as you fly it around the sky, you will be able to fly in just as light of wind, but getting it off the ground will initially be a little work. Closing off the leading edge and adding the baffles does add some weight to the kite and that will also impact how light of wind you can fly in. 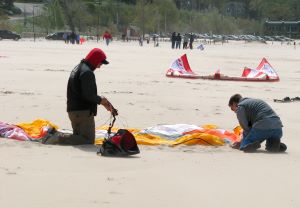 Now let's talk about setup and pack-up. Foil power kites are hands down the easiest kites to set up, whether they are open or closed, it makes no difference! Unroll the kite with the leading edge pointing downwind, weight the trailing edge, and you are moving on to your bar. You always leave your lines attached to your kite and, if wound correctly, they will come out with maybe one twist every time. This makes setting up your bar super quick- no more walking out lines and attaching pigtails in the cold!!!. Literally 15 minutes from the time you get out of your car to the time you're flying your kite.

Pack up is just the reverse, but the difference of having an open cell versus closed cell is very clear here. An open cell foil is just as fast to take down as to launch- land it, wind your lines, fold up your kite, pack it, and jump in the car. With a closed cell foil, you will need to unzip a couple ports on the kite to let out the air as you roll the kite up. This is a very important step, and if it is windy or cold, forgetting to unzip the canopy can lead to extra time trying to squeeze all the air out of the kite that is still trapped by the baffles. Even when you unzip the canopy, rolling a closed cell foil can sometimes take just as long as rolling an inflatable kite. So pack up time is extended when you choose to go with a closed cell foil.

Finally, let's briefly talk about impacts between a closed and open cell power foil. Since both style foils do not have a rigid structure, they do handle taking a hit really well. An open cell foil will be able to collapse once it hits the ground much quicker and will sustain less damage if a hard hit occurs. This is because the open leading edge allows for the air to rush out of the kite, minimizing the pressure created inside the kite by the impact. A closed cell kite has to deal with that pressure in a different way. The air can be forced out of the baffles in the front of the kite to some degree, but there is still a lot of air held inside the kite. Some closed cell designs are equipped with blowout ports, little velcro openings on the wingtips that will release if the pressure is too great inside of the kite. Although both open and closed cell foils are known to be able to take a hit a little better than an inflatable kite, no kite is built to be indestructible. 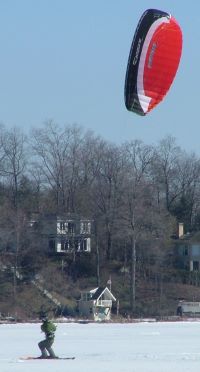 Which type of foil is best for you?

Which kite you should choose when picking your foil drastically depends on your end goal, wind conditions in your area, and budget. If you plan on using the foil on both land for snowkiting and water for kiteboarding, your only option would be to look at a closed cell foil. It will give you the best of both worlds- snow and water.

If you are looking for a power kite to snowkite with so you do not have to use your inflatables in the snow and ice and risk damage to them, check out the Apex line of power kites from HQ- they have pretty good predictability in the gusts and have a lower price tag compared to any closed cell foil on the market. The Apex will also show the least impact by the windy gusts. This would be the perfect option for anyone looking to get into kiteboarding- learn on the snow with a durable little kite and then transition to the water with an inflatable, knowing that you have built your kite flying skills all winter long on the Apex.

Cost will also be a determining factor on what kite is right for you. A closed cell power foil kite will run you about 30-50% more for the same size kite. Why? Partly because it costs a little more to build, but mostly it is because you are paying for the added feature of relaunching it off the water!!! And yes, that is a huge deal!