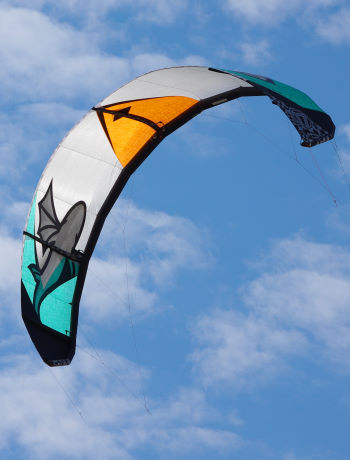 Ok, let's just start this off by saying I have not been a fan of kites larger than 14m for a long time. I started kiting an Airush 16m Lift back in 2004. Yeah, that was a little while ago. In 2008 I purchased a Cabrinha Contra 14m and swore I would never ride a kite bigger from then on. Oh, did I mention that I am 260 lbs? Yup, I am a big guy and my thinking was "why do I want to ride in winds less than 16-17 mph; anything less is just boring for an experienced kiter, right?"

Well, that was before Ryan Evans from Best Kiteboarding set me up with a 17m Best TS or "Taboo Series" to demo and compare to the 16m Cabrinha Crossbow. With my expectations already jaded towards thinking all big kiteboarding kites are worthless, and that the hype Ryan was throwing down was just that, I have to admit the 17m TS really opened my eyes with what is possible with large kites for large riders. Heck, even the guys at the shop who weigh in at 170-180 are loving the Best TS 17 meter kite for light wind sessions.

The first thing I noticed was the Best 17m TS seemed to pump up a little quicker than the Cabrinha 16m Crossbow. Not saying either are fast to inflate; they are both huge kites and "quicker" is a relative term. Only complaint is the small inflation point. Hoping Best improves this aspect on all their kites, but that is just a minor pet peeve since I am so used to pumping up Cabrinha and Liquid Force Kites.

The Best Redline Bar system that we are using with the TS is very simple and easy to use and reset safeties. The grip on the bar is nice and comfy and easy on the hands, really like to see that when it comes to kiteboarding bars. The replaceable dugout on the bar is a nice added touch and a simple solution to the worn out dugout issue that most bars have.

Now to the "Best" part! The TS doesn't feel like a 17m kite in the sky. It actually felt smaller, turned faster, and feels more nimble in the sky than my 2008 14m Cabrinha Contra. Yup, faster than a 14m kite and that is not an exaggeration. Compared to the 2012 16m Crossbow, the TS blew it away in terms of turning speed. Upwind they were both pretty similar; the Crossbow did seem to have a little more low end, but not much. It is the turning speed of the TS that really opened my eyes to the fact that big kiteboarding kites have come a long way. I LOVE THIS KITE!

Oh, and that thing that everyone is concerned about: how is the bar pressure? All I have to say is- what bar pressure? There was just enough pressure to know where the kite is in the sky, and that is about it when riding in conditions that are reasonable to the kite. Yeah, at 20-24 mph there is some pressure, but seriously- it is a 17m kite and it was blowing over 20mph... I am pretty sure only BIG guys will experience that much pressure in the bar, and I really have to admit it isn't a good idea to be kiteboarding with a 17m kite in winds over 20 mph anyways.

For me at 260 lbs, the 17m TS was lit up but manageable on the water at 23 mph, but on land it was a handful and pretty sketchy. That is a testament to the amount of depower and trim that the kite is capable of. I noticed that even with the trim strap pulled in all the way to depower the kite, the TS still handled well.

Self landing in sub-17 mph winds was actually pretty easy. Attempting it on the days that I had the kite out and the wind ramped up to over 20 would have been a mistake; that's when your kite buddies rule. Use your head with big kites; they have a lot of power and it can go bad quick in higher winds.

The best TS is now my go-to kite when I head out to go kiteboarding in light winds. Combined with an Aggression Customs Barn Door, a board similar to the Slingshot Glide, I am able to ride upwind in a steady 12 mph and at 14-15 mph I can actually ride my smaller 132x44 Aggression Phatty. Prior to riding the Best TS, I would wait to go out until it was 15 and then I would be lucky to stay upwind with my big board.

In my opinion, Best Kiteboarding has hit a home run with the TS line of kiteboarding kites. The quick turning and unbelievable upwind ability of the 17m TS make this a kite that any big rider should have in their quiver. More importantly, I have realized that the 2012 line of Best Kites are nothing like the Best Kites in the past- get ready for a change of attitude when you hook up to one of these bad dogs! You will see that Best has come a long way since their early days, and you may just end up being surprised by the experience, just as I was.

Thanks Ryan for the HUGE eye opener!

Check out our current selection of Best kiteboarding kites.