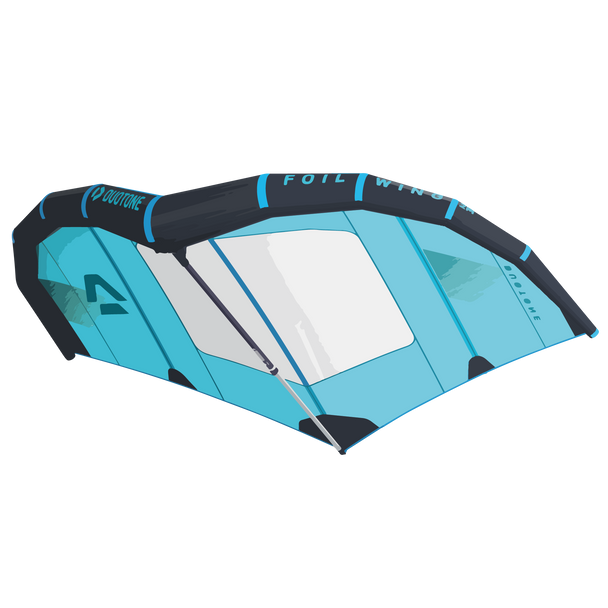 The Duotone Foil requires the addition of the Duotone Silver Series Boom. This Boom will work on all wing sizes. Wrist leash is strongly recommended to avoid losing your wing.

By now you’ve seen the videos and heard the news, the Foil Wing is here! All you have to do is give it a try and see how this fun new water sport feels and be one of the first ones to try it. Wings have been around for a while, however, with the evolution of surf foiling they finally offer a totally new way to enjoy the ocean. The Duotone Foil Wing has been in development for a couple of years, and the design team have tested countless prototypes in order to create the perfect shape. During this process, it quickly became apparent that there were numerous advantages to using battens in the wing. They help to keep it rigid, reduce flutter and consequently drag, making it much more efficient. By utilising a boom, you also get unlimited choices of hand placements and a much more rigid connection to the wing itself. This helps with control and power development. The boom is also adjustable so it can be used with all of our foil wings. Particular attention was paid to the leech tension and shape; this area of the wing not only helps with upwind ability but also aids power control when pumping the wing and the foil. The Duotone Foil Wing has been fine-tuned to offer excellent responsiveness to rider input, and it is also incredibly light, giving you plenty of control on the water. The Duotone Foil Wing is taking foiling in a new direction where the only boundaries are your own imagination. All that is left for you is to take flight and enjoy the ride!

MSRP:
Now: $769.00
Was:
2020 Naish Wing-Surfer Size: 4m The Wing-Surfer is the ultimate handheld inflatable surfing wing. It’s a cross between a windsurfing sail and kiteboarding kite but with no...

MSRP:
Now: $769.00
Was:
2020 Naish Wing-Surfer Size: 4m The Wing-Surfer is the ultimate handheld inflatable surfing wing. It’s a cross between a windsurfing sail and kiteboarding kite but with no...

MSRP:
Now: $799.00
Was:
2020 Cabrinha Crosswing INTRODUCING the CROSSWING. The Crosswing from Cabrinha is the simplest form of wind driven power you can hold in your own two hands. The Crosswing is a compact, fully...

MSRP:
Now: $2,243.00
Was:
Performance SUP Wing Foil package This package has been created by our team to get you started Wing Foiling or SUP foiling with the right gear at a great price.  We have curated our favorite...