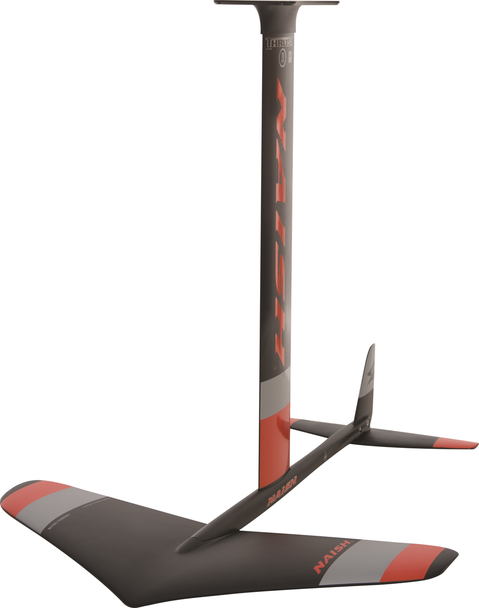 The Standard Thrust is Naish’s all-around foil, designed to accommodate a variety of conditions. The segmented front wing combines both dihedral for stability with anhedral shaping for early lift. While adequate in lighter winds, the higher aspect Thrust really shines with more power and consequently speed. Hitting that sweet spot, the higher speed stability encourages you to get up and move around the cabin, allowing you to really play around on your deck and push your foiling to the next level.

What Naish has to say about the Thrust Windsurf Foil

While forgiving for those just getting started, the Thrust Windsurf foil setup also offers boundless potential for those looking to advance their skills. 50% lighter than its 2018 counterpart, the 2019 delta shaped front wing creates lift at very low speeds and maintains stability through both for-and-aft as well as side-to-side movements. Compared to high aspect wing shapes, this delta is incredibly user-friendly and delivers earlier lift. Whether it’s blowing under 10 knots or if the wind is hitting the high 20s, this wing is ready for the ride. Conversely, in the same conditions, riders on high aspect wings are forced to switch to a smaller wing set, since their lightwind wing sets would no longer be controllable.

Easy jibing and other maneuvers are another advantage of the Thrust WS setup. The delta front wing works in tandem with the vertical stabilizer of the back wing to deliver easy control when turning. The front wing provides lift at low speeds making it much easier to cruise through a jibe without coming off the foil. While high aspect foils require the board to plane first, the Thrust WS setup engages the foil, lifting you up even when the board has not reached full planing.

The Thrust Windsurf foil setup offers the earliest foiling in the lightest winds, maximum control at any wind speed—in comparison to high aspect foils—and accessible maneuverability in jibes and tacks. Its unique design, not only welcomes new riders to the sport, it supports you through the journey as you advance your skill level.