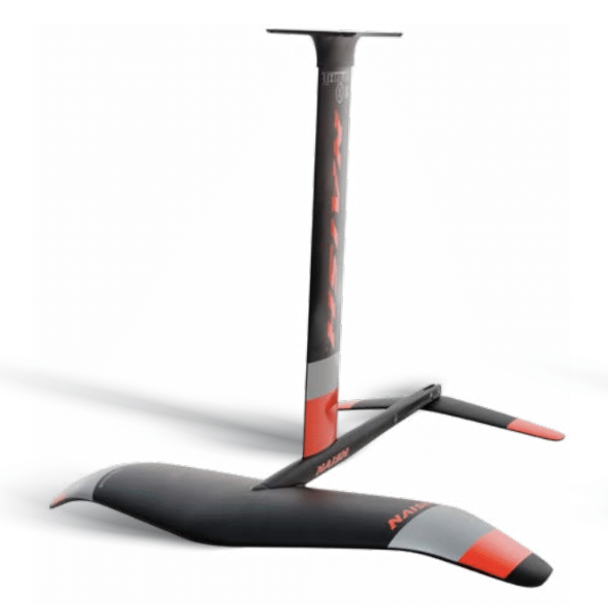 The Thrust Surf returns for 2019, identical except for being a few ounces lighter. Larger and lower aspect than the Thrust Standard wing, the Surf wing provides more lift. That means better performance in light winds and at lower speeds, giving a super stable feel that beginner to intermediate kite and wake-foilers tend to love. For those looking to prone surf, the standard Surf wing is ideal for surfers 160-170 pounds and below. If you’re 170+, the Surf XL wing will be the ticket.

The most exciting improvement is the addition of the XL wings.  These 1572 square centimeter lift producers give heavy riders a shot in small waves and provide small to medium riders a good option for downwind stand up paddle boarding.  Rather than simply scaling their current medium and large design, they have completely re-designed the wings to provide maximum low speed lift with their flat front wing with smaller bent wingtips for phenomenal tracking.  The XL rear wings provide maximum glide, pump power, and efficiency.  So much so that in breaking waves more experienced riders will prefer the standard rear wing to add some playfulness to the ride.

What Naish has to say about the Surf Foil - Standard

A bold success from the onset, the Naish Thrust Surf Foil Program welcomes the XL setup to its highly sought-after line-up. Delta shaped front wings coupled with downturned wingtips deliver the perfect balance between early lift, efficient glide and outstanding turning ability. A slightly flat section along the bottom of the wing adds stability in straight flight while downturned wingtips heighten control in turns for easy carving and redirection without losing lift. The back wing helps to stabilize the front wing while providing extra power when pumping through flat sections. Adding to the high lift, efficient design, this wing model offers a larger window before stalling, making them easier to ride and control when compared to other wings on the market.

Three front wing sizes widens the range of rider weights and surfing conditions covered. The new XL adds riders above the 210 pound mark to the foiling club while bringing the threshold for surf size down even further. The XL set is also a great option for downwind conditions. And many pairing options allow riders to perfectly tune their setup to their needs, with the standard backwing pairing well with the M or L front wing and the XL backwing reserved for the XL front wing.

Surfers that dabble in other sports will find a solid multi-sport solution in this setup as well. Performing well in low wind and lower speeds, this ultra-stable setup is good for beginner-to-intermediate kite foiling, windsurfing, wake-foiling and other medium to low speed foiling.